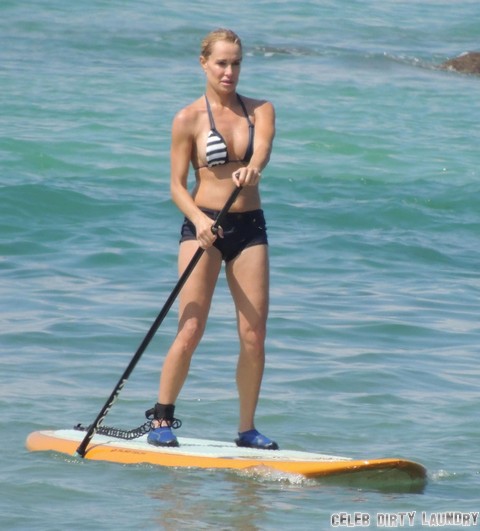 Fans of The Real Housewives of Beverly Hills have seen Taylor Armstrong struggle for years; the Botox happy mother was victim of domestic abuse before her husband committed suicide, and since then she’s turned to alcohol to escape. Last episode, we watched Kim and Kyle Richards confront her about her boozy behavior, and Taylor’s response was hopeful and compliant. But in the months since filming, her drinking has gotten out of control, to the point that network execs and her daughter’s paternal family are getting involved. In fact, it’s gotten so bad that she may lose custody.

“Taylor is totally out of control,” an insider told Star Magazine, print edition March 11, 2013. “She is drinking nonstop and is drunk around Kennedy all the time. At this point, that poor little girl is more used to seeing her mother drunk than sober.” Fans watched in horror two weeks ago as Taylor ditched her daughter with Kyle to go on a spontaneous vacation with her married fling, John Bluher. Her voice on the phone was giddy and slurred, and she was unaware of where her daughter was. “Russell’s whole family is very concerned. If that means fighting for custody, they’re going to.”

Taylor is “getting the boot form the hit Bravo series next season, partly due to her astonishing alcohol intake,” and I expect the loss of a work schedule will cost her more than money. Kennedy’s aunt Laurie Kelso is ready to help, and promised that “if Taylor does have a drinking problem, I will step in and take care of Kennedy—anyone in our family would.” Grandmother Jean Anders feels the same: “I am terribly worried about Kennedy. I only see her on TV, so I don’t know if she’s OK. She needs her family.” We hope that Taylor can seek help and face the emotional demons that are pushing her to alcohol, even if it takes the loss of her daughter to make her admit she needs help.