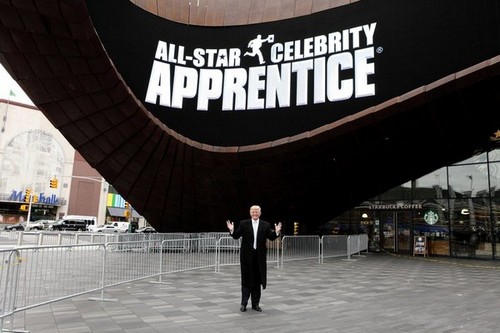 Tonight my favorite show THE CELEBRITY APPRENTICE returns with a whole new episode called, “The Mayor Of Stress Town.”  On this week’s show John Rich returns as a boardroom advisor to judge a task at Barclays Center Brooklyn. Did you watch last week’s episode? We did and we recapped it here for you.

On last week’s show with just six All-Stars remaining, the teams were asked to write, produce and direct a demonstrational video to highlight LG’s Smart Home and Home Entertainment systems. One Project Manager’s runaway concept left the team with little choice but to follow their leader, while the other team got too caught up in small details. Boardroom Advisors were: Joan Rivers and Ivanka Trump.

On tonight’s show the All-Stars are asked to design a Foxwoods Resort themed suite and host a party at the brand-new Barclays Center. One detail-oriented Project Manager gets too literal with the theme, while the other team’s plan could be shut down due to bad weather. Boardroom Advisors: John Rich and Donald Trump, Jr. Special appearances by Lisa Lampanelli, Hunter Hayes, Teller and David Burke.

The show airs tonight at 9PM and you do not want to miss all the drama, cat fights and bitching. You also do not want to miss seeing who is fired. So don’t forget to come back to this spot for our live recap of the Celebrity Apprentice All-Stars Episode 10. While you wait for our recap let us know how you are enjoying this season of The Apprentice.