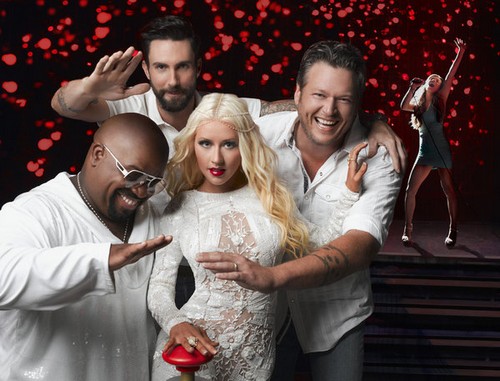 THE VOICE is one of our favorite singing reality competitions because the judges – definitely have a good ti4e and are even quite funny. Tonight, The Voice season 5 will be returning for “The Battles, Part 4”  on tonight’s show The coaches use their final artist battles and steals to complete their teams for the upcoming knockout rounds..  There was some amazing battles on last week’s show. In case you missed it, check out our LIVE RECAP — CLICK HERE.

On last night’s show the pressure was only intensifying on the third night of battle rounds. With the coaches’ steals dwindling, the remaining contestants had to bring their absolute best if they hoped to remain in the competition.

On tonight’s show in an hour-long episode, The Battles Part 4, the battle rounds will conclude.  The only coach who has a steal left is Cee Lo, and he has only one.  After tonight’s show all the teams will be set, and next week we’ll get to see the teams begin battling against each other.

Tonight’s  The Voice “The Battles, Part 4”  is going to be an exciting one, which you won’t want to miss. So be sure to tune in for our live coverage of NBC’s The Voice – tonight at 8 PM EST!   While you wait for our recap, hit the comments and let us know how excited you are about the new season of The Voice.

RECAP: The first is Jonny Gray and Shawn Smith from team CeeLo, Jonny was in the military before auditioning and singing was his little thing to do with the troops. Shawn lost his hearing in the military after an explosion went off, he’s known as Big Sexy. Shawn and Jonny became friends fast; the two of them served in the army and gained bond having that similarity. Their song is “Refuge” by Tom Petty and the Heartbreakers. Shawn is having a little difficulty but he’s working hard to find the right way to sing the song. At their final rehearsal Miguel is really impressed with the two and their spin on the song and wants them to command the stage.

Adam says that he believed every word they sang, he is impressed and believes it is a wonderful performance; but gives the edge to Jonny. Blake says that it was hot, he knew that neither of them held anything back and loved Big Sexy. Christina says she enjoyed the song and the performance they gave; he biggest regret though was not pushing for Jonny she loves his energy. CeeLo says that the winner of the battle is Jonny.

Shawn says that he appreciate CeeLo’s words and guidance and loved his passion for what they did in the military.

Now it’s team Adam with Barry Black and Preston Pohl, Barry amazed Adam and Blake with his weirdness. Preston was in a Christian Rock band but wanted to come back in a solo career. Adam paired them up because of their soulful voices and they are doing the song “I Wish It Would Rain”.

At the final rehearsal, Ryan and Adam are really enjoying them so much. Ryan believes this is going to be an incredibly hard choice for Adam.

Blake says that he loves the horn and believes he’s really cool; Christina says that Preston has an amazing voice that just drives you in. CeeLo says he appreciates their unique talents but Preston sounded so much like the original singer; he had such a great soul voice. Adam says the song was amazing with how much they did justice; he loved Barry’s horn because it seemed so natural but got goose bumps from Preston’s vocals. Adam decides that Preston is the winner of the battle.

Barry thanks Adam for this opportunity and allowing him to do what he loves in his life; CeeLo didn’t steal him though wanting to save his final steal.

The final battle pair is Olivia Henken and Stephanie Anne Johnson from Team Christina, Olivia practiced to be on The Voice all her life having been singing for several years. Stephanie sang on a cruise ship before coming to The Voice; she is gone a long time and is ready to come back to land. Christina paired them up because they are very sassy and gave them song by Mariah Carey. Christina really can’t see what these two girls will bring in the upcoming battle; Ed really believes the song is mostly about atitude and their vocals.