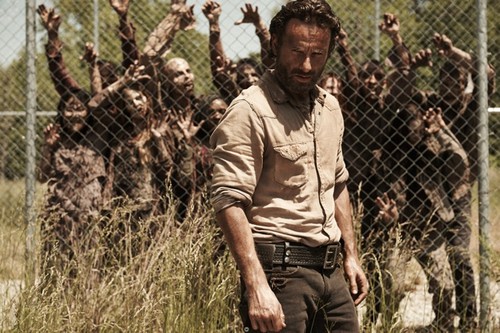 THE WALKING DEAD returned to AMC tonight in all its gory goodness.  One thing for sure this season there are more walkers and they are more dangerous because they know where Rick and the gang are.  As usual, we will be providing you with the juiciest, previews and teasers out there.  We have a sneak peek video and some insight for you below on what is going on next week below.

On tonight’s show it opens with the group still in the prison and they have managed to create a fairly decent home.  Maggie and Glen are still a couple and Maggie is ready to play house and his hesitant. Rick has decided to be a better father this season.  Remember last season Carl was getting a little to blood thirsty so this season Rick is trying to carry a gun less.  As we have suspected Rick and Michonne are growing a little closer.  The big shock on tonight’s episode was someone turned into a Walker with out being bitten.  Yikes.   Did you watch tonight’s episode a whole lot happened?   If you missed it we have a full and detailed recap, right here for you.

Spoiler alert: If you’re one of those people who doesn’t like spoilers, stop reading now! We have some juicy spoilers for you about the season 4 episode 2 of AMC’s “The Walking Dead.”

AMC Official Synopsis: “A brand-new enemy has the group fighting to protect the life they’ve built at the prison.”

On next week’s show Rick and his group will face off against a new, never before seen, enemy. The threat will be the zombies new ability to tear through the fences and get into the prison that Rick and company have considered safe.

The Walking Dead Season 4, Episode 2 “Infected” airs on AMC on October 20th, 2013. Check out the preview videos from episode 2 below and let us know in the comments below what you think!