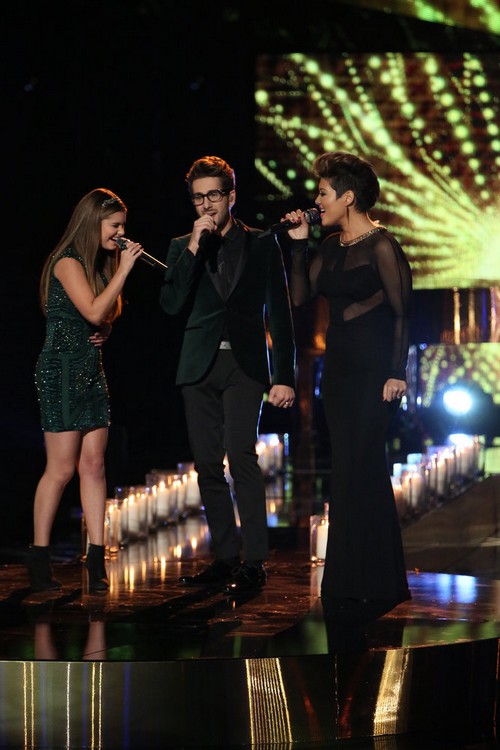 Tonight after a fantastic season it is the season 5 finale of THE VOICE and host Carson Daly will reveal who America has chosen to be the season 5 winner of The Voice by the end of the evening.

This season has been the singing reality shows best season ever.  The talent gets better, season after season and it is difficult to predict who will be chosen tonight as the ultimate voice.  Last night the three remaining contestants: Tessanne Chin, Jacquie Lee and Will Champlin had some incredible performances.  Did you watch last night’s show where the remaining three contestants brought their “A” game?   If you missed it you can check out our full and detailed recap, right here.

We conducted a poll today and 54.81% of our viewers think Tessanne Chin will be crowned winner of The Voice tonight.  22.12% are rooting for Will Champlin, with Jacquie Lee following with 23% of the vote.  If you have not voted in our poll there is still time, GO HERE!

On tonight’s final result show one singer will be announced The Voice and the show will feature special guest performance from Lady Gaga will perform her current single “Do What U Want,” from her latest release, “ARTPOP.” R. Kelly is originally featured on the song, and he and Lady Gaga shared the stage when she appeared on the Nov. 16 telecast of “Saturday Night Live.” Celine Dion will duet with NE-YO on the song “Incredible” from her new album, “Loved Me Back to Life.” OneRepublic will perform the song “I Lived” from its recent album, “Native.”

Tonight’s  The Voice “Finale”  is going to be an exciting one, which you won’t want to miss. So be sure to tune in for our live coverage of NBC’s The Voice – tonight at 9PM EST and find out who is crowned the winner!   While you wait for our recap, hit the comments and let us know who you are rooting for?

Kicking off the show is all 20 of the artists who made it to the live shows reunited and singing “Tonight Is The Night” Adam mentions that he feels great tonight and that the final three have really worked hard; he’s proud for all of them. CeeLo says that the artists go through so much; they have to learn a bunch of choreography and lyrics, he is impressed to see how well they all performed last night. Christina says that she would be glad to be the first female coach to win The Voice; but she is just happy to be at the end of the journey and can’t wait to see who America picks. Blake says that he believes the winner is obviously down to these last three and that’s all he knows.

Jaquie Lee is singing “Bohemian Rhapsody” with Matthew Schuler, Caroline Pennell, Cole Vosbury and James Wolpert. She brought them back to perform this song with her because she feels like their voices blend well and she loves all of their voices a lot.

We now see a compilation made for Adam Levine which is dedicated to him winning the most sexiest man alive in People Magazine; Blake says he is a beast back stage . Christina says he’s a massive distraction when he walks into a room.

Next up is Tessanne Chin and singing “Love Can Move Mountains” with Celine Dion.

We now take a look at fans that are doing impressions of the coaches.

We now see a complication of CeeLo and some of the weird things he has said on the show; Christina says he needs to come out with a poetry book and that he can make anything sound confusing. Adam says that CeeLo loses him a lot; you’ll never find a guy quite like him.

Next up is the eliminated contestants from this season; Preston, Matthew, Nick and Ray singing “Treasure” by Bruno Mars.

Now it’s Will Champlin and he is bringing back Jonny, Austin, Caroline and Cole. He loves how unique their voices sound and that he loves getting the chance to perform with them on stage; they are singing “Wagon Wheel”.

We know see a complication of Christina Aguilera and her amazing voice being shown off a lot throughout the season; all the artists who worked with her and find it incredibly amazing to see her show them what to do. Adam says she sometimes makes some of the weirdest sounds; it’s really awkward.

Next up is Timyra, Shelby, Kat, Donna, Gray and Amber singing a song by Kelly Clarkson.

We now see our finalists getting to go out and take a trolly ride throughout Universal Studios; they drive through Who-ville and see the Grinch. They are all getting brand new cars; they can pick from four different types for Christmas from KIA.
Now performing on stage is Celine Dion and Neyo performing their song “Incredible”

Right now is Tessanne; she brought back James, Grey, Preston and Olivia. She chose them because she believes their voices are truly distinct and she loves them all very much. They are singing “Hold On I’m Coming”

We now see a compilation of Blake Shelton and his amazing dancing skills throughout the year; Adam calls it downright ugly. Blake feels like he can sing but is a born dancer; CeeLo says his skills are minimal. Christina feels there is no hope for Blake and his dancing skills; we now see Blake do Foot Loose.

Now we have Lady Gaga and Christina Aguilera singing “Do What You Want” off her latest album ARTPOP.

Now it’s the time we have been waiting for; Jaquie says that she loves Christina and that she really appreciates everything she has done for her now. Will says to Adam that it’s been an amazing journey and it’s been an honor to just be in his presence.

Tessanne says to Adam that she could never find a better coach and thanks him for choosing her; he is a great guy and an absolute pleasure.

Okay what we have all been waiting for:

The finalist in third place is WILL CHAMPLIN

The finalist in second place is Jacquie Lee

THE WINNER OF THE VOICE TESSANNE CHIN!!!!