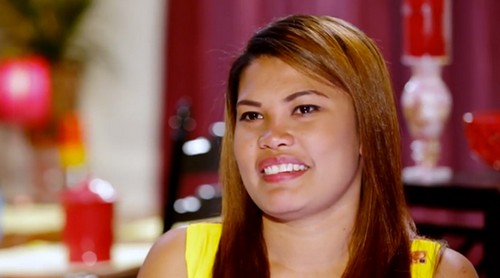 Tonight on TLC 90 Day Fiancé continues with an all new Sunday November 30, season 2 episode 7 called, “I Have Something to Tell You,” and we have your weekly recap below for you. On tonight’s episode Danielle has bad news for Mohamed; Jason and Cassia struggle with his work schedule and the wedding budget; Evelin bonds with Justin’s mom; Brett’s skeptical friend finally meets Daya; Danny hopes Amy’s not offended by his conservative parents.

On the last episode, Justin and Evelin invited Jake and Jen over for dinner. Daya confronted Brett about Cassidy’s behavior. Amy’s mom arrived from South Africa. Yamir met with music producers in Chicago. Jason had a surprise for Cassia. Did you watch the last episode? If you missed it, we have a full and detailed recap right here for you.

Cassia and Jason’s relationship still isn’t doing so well. They recently got engaged and on tonight’s episode Cassia is wondering how she can eventually marry someone she’s never gotten the chance to know. Jason has been working nonstop since her arrival in the US. He says he wants to save up for the wedding but Cassia misses him. And the less time she gets to spend with him equals the higher chance of there not even being a wedding.

And speaking of the barrier some of the men have put up around themselves. After fighting his family for so long on whether or not he’ll invite them to the wedding, Justin is now have second thoughts about marrying Evelin.

It seems the two of them never gave each other the chance to explore their relationship. They just swung from one extreme to another. They got engaged after a mere few days of physically being in each other’s company. And things weren’t all rosy after they got engaged. Justin expected Evelin to come in and clean. While Evelin was kind of shocked about the callous way Justin was treating his family.

Family is very important to Evelin so she tried to get Justin to change his mind about who gets to come to the wedding. And once she started to voice her own views – suddenly he wants to question their whole relationship.

Then there’s Danielle and her fiancé. The two of them have been experiencing money troubles. Yet they don’t want that to get in the way of them getting married. Apparently Danielle wants to have her dream wedding and those types of things doesn’t exactly come cheap. So Mohamed wants her to start thinking realistically.

Which is kind of funny. Especially coming from him because no one that has met the couple actually believes these two can last. They see Danielle as she is. Desperately single. And they see Mohamed as a young opportunist.

The sad truth is that the wedding is seen as a joke. And that’s why Danielle’s family doesn’t want to spend too much money on what they think is a passing fancy. But regardless of the many challenges all of these couples have been experiencing – no one, as of yet, has called a halt to their ill-advised wedding.

And the word ill-advised is the perfect word to fit the situation. Because no one thought their engagements through. It’s like they didn’t envision their married life outside of the honeymoon phase.

For example, Danny and Amy are super excited about getting married. But his father is acting as a major roadblock to their happiness. Danny’s father doesn’t believe interracial marriages can work. According to him, other people won’t accept it. Which is kind of a lie seeing as there’s plenty of cases of interracial marriages in the US. So it’s not like it’s something new. And just because he claims not to have seen much of it down in Texas, doesn’t mean they aren’t happening.

He’s just a racist and instead of being honest about it – he’s choosing to mask who he really is behind a false dose of concern. So Danny could either accept his father as he is, in which he automatically knows the other man will have plenty to say when he starts having kids with Amy, or he cut his dad from his life.

But there’s no way the dad is changing his mind. He’s rude and crude!

And Brett and Daya are naive. They finally got over the hurdle that came from having his daughter around all the time. Yet the little girl seems to be the only one they managed to convince about their relationship. Brett’s mother has voiced her issues. And now it’s time for Brett’s friends to speak up.

Sue, a good friend of Brett’s, has seen similar cases to Brett and Daya’s. So she didn’t hold back on stating that she’s only seen divorces as the outcome to these kind of marriages. Which was a tad harsh. Though Sue had simply said that at the time because she wanted to see Daya’s reaction. If Daya is really after a green card then she needed to know Sue was going to be suspecting her.

As for Daya, she denied being a user. She said divorce wasn’t even an option for her but, honestly, only time can tell if that ends up being the truth.

So far Daya has adjusted to both being in the States and in her role as a future stepmother. The one thing that’s obvious is that she came to care for Cassidy. Prior to meeting the little girl, Daya freely admits to the fact she was self-centered. Then Cassidy came along and that kind of smooth away some of Daya’s rough edges.

When it came time to say goodbye to Cassidy, Daya was moved to tears.

And while Daya’s relationship appears to be getting stronger – there’s one relationship that looks close to ending. Danielle lost her job and her fiancé told her he couldn’t afford to stay with her if there wasn’t going to be any security in it for him.

So will he return to his home country or will he at least try to fight for a relationship he claims he really wants?