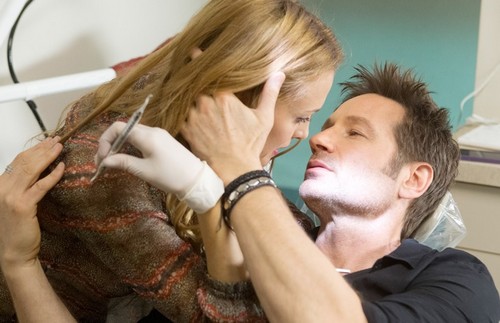 Tonight on Showtime Season 7 of CALIFORNICATION airs with its fourth episode called, “Dicks.” On this evening’s episode, Hank and Levon help Julia celebrate her new role. Meanwhile, financial trouble adds to Charlie and Marcy’s marital unrest, but a new client may put Charlie back in the black; and Levon tries to get some alone time with Melanie, but the Director keeps getting in the way.

On last week’s episode Hank got his first episode assignment, much to the dismay of coworkers Terry and Hugh. Meanwhile, Levon tried to bond with Rath’s assistant; Charlie attempted to patch things up with Marcy; and Karen considered giving up on Hank.  Did you watch last week’s episode?  If you missed it we have a full and detailed recap, right here for you.

On tonight’s episode Levon hopes for some alone time with Melanie but three’s a crowd with The Director in the way. Money troubles add to Charlie and Marcy’s marital unrest, but new client Goldie may put Charlie back in the black. Hank, Levon and Julia celebrate Julia’s new role.

Hank and Levon help Julia celebrate her new role. Meanwhile, financial trouble adds to Charlie and Marcy’s marital unrest, but a new client may put Charlie back in the black; and Levon tries to get some alone time with Melanie.

Tonight’s episode begins with Hank greeting Julia at the studio. He believes she is just visiting Levon, but she informs him that she has an appointment with Rath as she is being considered for a part. Julia shares that she is really nervous. She starts talking herself out of it and while Hank initially hoped she would not consider working with Rath, he is now trying to pump her up with some confidence before her meeting.

Later, Rath shows Hank the tape from Julia’s audition. From the sounds of it, Rath seems to have a crush on her as he is very happy that Julia will be around a lot if she has the part. Rath shares how beautiful he thinks she is. Then, he comes right out and asks Hank if he minds if he pursues Julia. Hank assures him he is over her and doesn’t have any intentions on having a future with her.

Charlie meets with a writer who is one of Hank’s coworkers. He is laying it on thick, talking about how wonderful the shows she has written are. He remembers an episode of Dawson’s Creek she wrote years ago and flatters her from head to toe. He is trying desperately to woo her away from her current manager. Charlie seems to be getting her excited over the fact that she feels like she is cheating on her manager with him. She is excited about the secretive side of it. She later tells him she is going to break things off with her manager for him and hugs him goodbye. He gets very excited and runs into the closest bathroom the finish what she started.

Hank and Levon share a conversation in the car about how hot Levon is for Melanie. Hank tries to sway hi to another girl in the office who is a “hard worker,” but Levon isn’t having it. Just then, Julia runs out screaming with glee that she got the part she tried out for. Levon is being very snotty about her excitement because he said that they came to California to launch his acting career, not his moms. Hank tells him to be happy for his mother and they all head out to a bar. Julia tries to give Levon girl advice but she is in party mode because of her happiness over her new role. Levon takes off after a call from Melanie, and later that night Hank drives Julia home from the bar and ends the night with a bit of a warning about Rath and the Hollywood couch. He explains that she is pretty naïve given she took in all the compliments Rath gave her about her natural acting talents.

Levon is at the office helping Melanie get some work done and the conversation turns to blow jobs. A writer from the show walks in and tries to send Levon on a run for coffee so he can be alone with Melanie. Levon tries to get out of it but his excuses don’t work and he is forced to leave the two alone. The overconfident guy shares his plan for Melanie and Levon isn’t happy. When he returns from his coffee run he sees the two of them having sex. As he is leaving, they see him walking out. After sharing his father is Hank, his nemesis tells him what an asshole his father is which gets Levon really upset. When Levon later talks to Melanie, she shares that since he is only a PA, he really doesn’t have a shot with her.

Julia is showing Hank some of her dental hygienist skills and they end up kissing. Levon calls right as the action begins and they are next seen on the couch at her place talking to Levon. Julia explains that what happened cannot happen again. Hank agrees. He is ready to go when he tells Julia how fun it was co-parenting with her for the night. She seems to want to hang out with him a little longer and they both smoke a joint as Julia just seems to be watching him in a lovingly sort of way. Next week is going to pick up again in the drama department so be sure to meet us back next week…same time, same place!