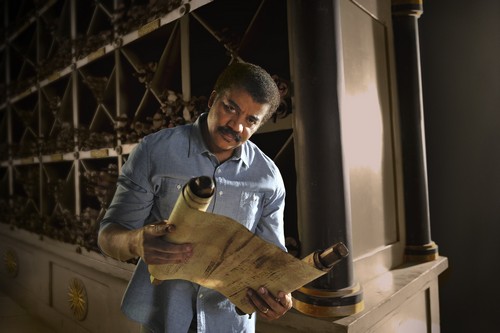 Tonight on FOX Carl Sagan’s stunning and iconic exploration of the universe as revealed by science, COSMOS: A SPACETIME ODYSSEY returns to FOX with a new episode and the season 1 finale called, “Unafraid of the Dark.” The first season concludes with a profile of Swiss astronomer Fritz Zwicky (1898-1974), a pioneer in the study of supernovas, neutron stars and dark matter in the universe; and a rumination on Carl Sagan’s best seller “Pale Blue Dot.”

On last week’s episode the Ship of the Imagination traveled to our near neighbor Venus, where we began our journey to discover the long history of global warming and the greenhouse effect. Later, explore the detrimental effects of climate change and traced the magnitude of our impact on the Earth’s atmosphere. However, with knowledge, technology and science within our grasp; imagine a hopeful future where we dedicate our efforts to taking care of our home, Planet Earth.  Did you watch last week’s episode?  If you missed it we have a full and detailed recap, right here for you.

On tonight’s episode the Ship of the Imagination makes a final journey to explore one of the biggest mysteries of the universe: dark energy. Meet one of science’s greatest unsung heroes, Fritz Zwicky, whose prediction of supernovas paved the way for our larger understanding of dark energy, the unknown force in the universe that overwhelms gravity on the grandest scale. On our final voyage, discover the romantic message embedded in Voyager’s Interstellar Golden Record and contemplate the spiritual experience of life on Earth as our cosmic journey concludes with Carl Sagan’s unforgettable meditation, The Pale Blue Dot.

RECAP: The dream of becoming a citizen of the Cosmos was born in Alexandria named after Alexander the Great. The Greeks created a library, this was the first time government wanted to invest a big quantity of money towards knowledge. This library soon became the biggest and greatest one on Earth. The Old Testament Bible comes from this library, medicine, history, theory, many written pieces were kept her and all of it is all but a tiny fraction that we have at our finger tips at this very moment. The collective knowledge for our species can be accessed by anyone now, but this wasn’t the same for those in Alexandria. We’ve come a long way together; we’re ready to perform an experiment. It’s not the kind of experiment that needs a laboratory; it’s one we can do with our thoughts. Choose a star from our entire galaxy; it’s orbited by thousands of planets and moons. Imagine if on that planet there is another form of species like us that they think their planet revolves around the galaxy. The jigsaw puzzle of geography was thought to be complete at one point, thinking that Europe, North America and Europe were all on Earth with one great ocean. In 1912 Victor made many voyages in the sky in Austria and found the thing that science loves best, a mystery that’s hard to explain. It was a new energy known as radio activity, which was found in the air. Where did this strange energy come from? Nobody knew. Victor carried radiation detectors to his hot air balloon to find out, when he reached to the cold half of the hemisphere he found that the radiation was twice as strong on the ground. The radiation must be coming from above, that the Earth was absorbing most of the radiation. He thought it could have been the sun, so he went and did it during an eclipse; he found out that the sun wasn’t affecting the radars at all. Victor found out Cosmic Radiance, without the shielding effect of the Earths shield it could be lethal.

The cosmic rays that Victor detected posted a mystery to scientists, they were of a different nature; far more powerful than in Victor’s world. Scientists couldn’t find out how, a man named Fritz was the first to understand how a massive star dies, which is known as a super nova. Predicted that if a dying star shrinks, its corpse would be so dense it would be made up of neutrons. Astronomers ended up finding these stars as soon as Fritz found them out. He made a discover in the 1930’s he noticed something funny about how the galaxies moved, that they were moving far too fast that they should be flying apart from them. He thought that something must have been binding them together, no one paid attention to this notion though. Vera an astronomer discovered that the outer stars were going the same speed as the stars closer; she thought this was weird and looked at several different galaxies finding out that they all were defying the laws of physics. Her colleagues looked into it also and found out that she was right, it turns out that something invisible was making them go fast. Dark matter makes galaxies and stars move faster, its nature is another mystery. This isn’t all, it gets crazier.

Dark energy makes up more of the cosmos and drives the expansion, Fritz was the one who paved the way to knowing its existence. The star experiences a super nova, leaving a neutron star or a black hole. You can’t tell how far a star is by how bright it is, but there’s another kind of super nova that only comes as one strength. When a dwarf star and a giant star tango together, they make an intense explosion that could rival against any star in the galaxy which would be five million times brighter than our sun. In 1920 a man named Edwin found out that the galaxy was expanding, we found out that this was happening ever since the Big Bang. Everyone assumed that the expansion of the galaxy would be slowing down as years go on, but that doesn’t seem so. If the universe had less Dark matter it would continue to grow forever. The expansion isn’t slowing down at all, it’s speeding up and it will continue to expand forever. There is a force unlike gravity that will be expanding the universe as we know it, it’s okay to not know the answer it’s better to admit ignorance. Thinking that you know everything makes it hard for you to learn something new. Only two of our ships have ventured into the great vast ocean of interstellar space. NASA’s voyager one and two moved about 40 thousand miles an hour and gave us a closer look a Jupiter’s red spot. The voyagers discovered the first active volcano on another planet and an ocean on another planet that contained twice as much water that we have on Earth. Saturn’s giant moon Titan has an atmosphere 4 times denser than Earth. Voyager two gave us our first look at Neptune. Voyager completes its mission on discovering new things in the universe, voyager one was the first to go to an uncharted realm. Voyager one passed a boundary we’ve never crossed before. A neighbouring star exploded before there was such thing as a human. Interstellar Ocean is dark and deep, out there the sun is the brightest star in the sky; no other objects touched by human hands have ventured further than the voyagers.

What could we have in common with an alien civilization with its own evolution? There’s one universal language, science. We have our own pulsars which are rapidly spinning neutron waves, the sun is the center of our diagram the pulsars have their own frequencies; they can use this diagram to find the home star in our galaxy from the voyager’s alone. The voyager has a shell life that can last for several years. How long is a billion years?

A billion years is about a month in the cosmic calendar, Earth didn’t have enough oxygen to have an O-zone layer. There were huge rain storms that made tons of glaciers; single cell organisms dominated the oceans. In a billion years from now, what will Earth look like? The only thing we can say for sure is that Earth as we know it will change so much it will be unrecognizable as home. In that distant future our sun will complete another four orbits around the center of the galaxy and the voyagers would have ventured far from the sun. Carl Sagan was a member of the voyager team, he convinced NASA to make the voyager to take a last picture of home the pale blue dot. It continues with playing dialogue from Carl Sagan himself, talking about that every person we’ve ever heard about or known lived on Earth. The Earth is a very small stage in a vast cosmic arena, think of the rivers of blood spilled by all those generals and emperors so that in glory and triumph they could become the masters of a dot. Our planet is a lonely spec in the great enveloping cosmic arc, our obscurity in all this vastness that hope will come from out there to save us from ourselves. Earth is the only known planet that harbors life as we know it today. We should cherish the pale blue light, the only place we’ve known as home. No idea is true just because some stays true, Neil Degrasse Tyson says even his own ideas are included. Always question yourself, if something is wrong, then it’s wrong and get over it. Follow the evidence where ever it leads, if you have no evidence reserve judgement. Remember you could be wrong, even the best scientist have been wrong in their life time. Have scientists known sin? Of course they have misused science just as we’ve misused our own tools. Some people like the universe to be small, other’s like Neil like it big; that what’s true is a lot more fascinating. He wants to know what lies beyond the cosmic horizon and how life began. If we can come to love nature as what it truly is, then our descendants will appreciate what we did and they’ll continue the search within the cosmos.