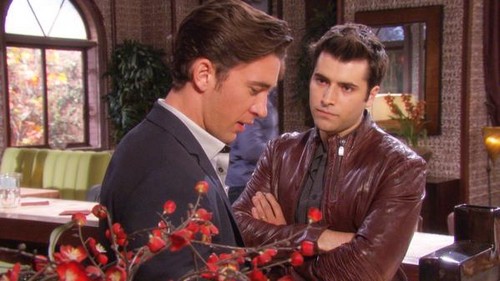 Days of Our Lives spoilers tease the DOOL writers have some exciting storylines planned for 2015. According to the Days rumor mill, there will be several characters coming and going as well. Seeing as how Christmas is right around the corner, we decided to put together our own Days of Our lives Christmas Wish List. Here’s what we hope to see on the NBC soap in 2015.

10. Eve Donovan Pregnant: Days of Our Lives rumors have been floating around that Eve is pregnant with JJ’s baby. We get that mother nature isn’t exactly on her side – but older women get pregnant all the time on soaps. And how awesome would it be when Jennifer learns her nemesis is going to give birth to her grandchild?

9. Melanie & Brady: DOOL spoilers teased that when Melanie Jonas returned to Salem she would have an unexpected new love interest. Please, please, please…let it be Brady. We’re not major Melanie fans, but Brady needs a love interest that doesn’t assault his father or rape his brother. He’s had a pretty crappy record in the romance department lately.

8. EJ DiMera Revived: If the DOOL writers are going to recast the character of EJ Dimera, they need to do it all ready. And if not, they need to tell us what the heck Kristen DiMera injected in to her dead brother in the morgue so that we can move on already.

7. Aiden’s Past: Call us morbid, but we really want Aiden to be a murderer. That would definitely spice up Salem. DOOL rumors have been flying around that Aiden killed his wife, and how awesome would it be if Hope cracked the case and had to arrest her own boyfriend? I mean, sure we want Hope to be happy – but this route is much more entertaining.

6. Paige Needs To Rebel: Is it just us or is Eve’s daughter, Paige, a total Debbie-downer? When was the last time you even saw that girl smile? Eve’s daughter’s goody-goody tendencies are really starting to put us to sleep. Going in to 2015 she needs to either rebel and go buckwild, or go away to college already so that the rest of Salem can finally have some fun again.

5. Nicole Needs Some Love: Arianne Zucker is a talented actress, and it really is a shame that she has wasted the last year pining away over Eric. Nicole needs a love interest…like yesterday. At this point, we don’t care if it is Daniel, or someone she meets walking down the street.

4. Bring Back Stefano: Stefano DiMera has a knack for stirring up drama, and Salem could definitely use all for the drama it could get right now. We really want to see Stefano and Kate battle it out…in person. And, someone needs to come put Chad DiMera in his place.

3. Stop Sending John Away: Days of Our Lives comings and goings have confirmed that John Black will be returning…again. But, we really don’t get why he had to leave in the first place. Stop sending John away! Marlena needs something to occupy her time besides listening to everyone in Salem’s problems.

2. Someone Cheat On Someone Already: We don’t condone cheating, but come on…it’s a soap opera. It’s been months since we had a good affair. EJ and Abigail’s sinful tryst really boosted ratings. DOOL spoilers tease that Will and Sonny are going to cheat on each other, and call us sadistic – but we can’t wait!

1. Bye, Clyde: Days of Our Lives spoilers confirmed weeks ago that Jordan is exiting the NBC soap, and we’re really hoping she takes her crazy step-dad with her. Maybe we’re still bitter because he murdered EJ DiMera and totally got away with it…but Clyde is on our last nerve.

So, Days fans, what would your DOOL Christmas Wish List look like? Any spoilers or rumors you want to see come true? Anything you would add to our list or take off? Let us know what you think in the comments below and don’t forget to check CDL tomorrow for more Days of Our Lives spoilers and news.