George Clooney’s Two Loves – Amal Alamuddin and Booze – Does He Need a Wife or a Sponsor? 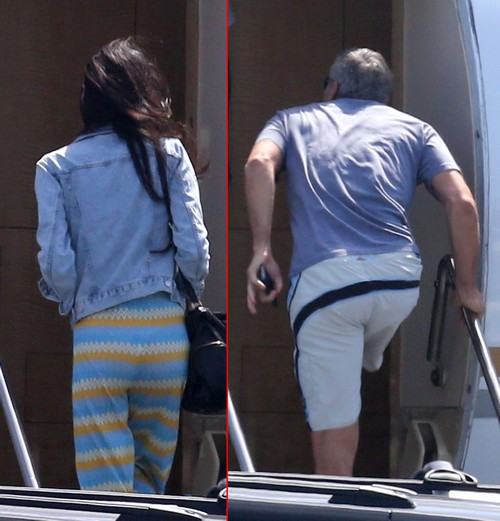 The media is still buzzing about actor George Clooney’s sudden engagement to gorgeous 26 year old lawyer Amal Alamuddin. The majority of Clooney’s fans had given up hope on the playboy ever settling down after years of juggling famous women. It looks like Amal Alamuddin might just be the real deal and Clooney may have finally found true love. But, will Amal hold a candle to Clooney’s other true love… his booze?

Clooney just made headlines over his high-profile argument with Casino tycoon Steve Wynn. The pair were spotted by several witnessed in a screaming match at a high-profile restaurant, riddled with profanity, over their opinions of President Obama. Apparently, Wynn called the President a few choice words and George Clooney was seriously offended and let him know. Clooney’s business partner Rande Gerber was present at the altercation and insists alcohol was not a factor in their fight. Multiple other witnesses beg to differ though.

According to a source of GLOBE Magazine, the altercation with Steve Wynn wasn’t the first time Clooney’s alcohol has gotten the best of him, and it won’t likely be the last. The source told Globe, “He can get loud, argumentative, and even a bit obnoxious. You have to wonder if he needs a stint in rehab. George turns into a different person when he drinks. He’s no longer the suave Clooney that the public knows.” GLOBE’s source added, “Clooney’s fun to be with when he’s sober. If you have a chance to drink with him you want to get there early, and don’t stay too late.”

So, it sounds like George’s new fiancé Amal Alamuddin is going to have her hands full keeping her hubby-to-be on his best behavior. We can’t help but wonder if she knew before she accepted his proposal that he was in need of a sponsor, not a wife.