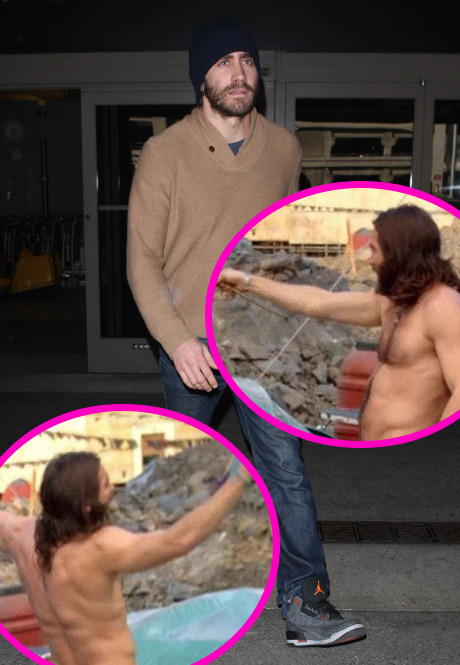 Jake Gyllenhaal, famous for his role in Brokeback Mountain, bares his behind in his upcoming movie titled Everest. He’s currently filming the movie in Rome and was photographed on set with nothing more than a weird pouch covering his private bits. In the photos (slightly censored above), he’s rocking a crazy beard and long hair. The movie, which tells the true and tragic story of two individuals who set out to climb Mount Everest, won’t be out for a while — but people are already getting super excited for its release.

The actor spoke with GQ Magazine about the film: “With Everest, it’s a story that I’ve always been fascinated with – even as just a metaphor. The idea of what is seemingly unattainable, but the reasons why people go there and try and as they say “conquer” a mountain. That is a fascinating turn of phrase. That somehow getting to the top of it is conquering it.”

On whether or not he can relate to the story and his character’s sense of adventure, he says, “I like the idea of the adventurer’s spirit. I think that is very much what a man searches for, in a certain way. But where I find myself getting caught up is where that spirit doesn’t meet discipline. What I loved about the process of researching Everest is just what a science it all is.

“You can believe in the sense of adventure, and you can create nostalgia based on some lofty idea of it, but ultimately to conquer that mountain requires great discipline – using your critical, analytical mind – as well as that spirit we all talk about.”

Are you looking forward to seeing Jake in this adventurous-sure-to-be-epic movie? Let us know in the comments section below!