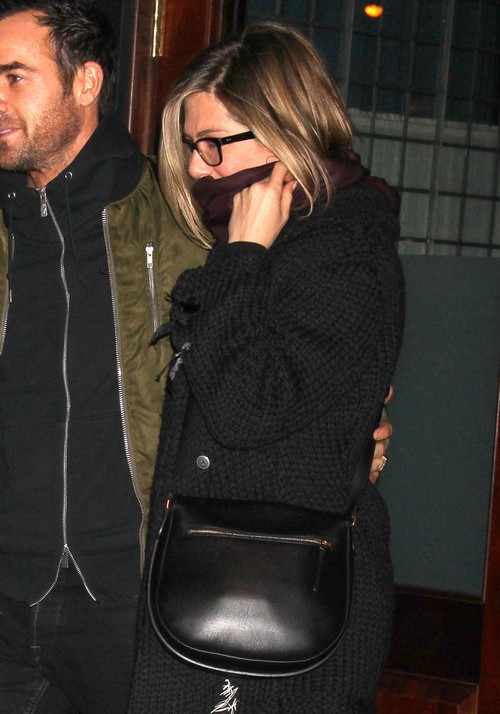 Jennifer Aniston and Justin Theroux have been spotted together [in New York City] for the first time in a very, very long time, sort of putting to rest the rumors that they’ve broken up. We still don’t really know whether everything’s all hunky dory between them, or if they really are having trouble – but they want you to think that everything’s fine, hence this photo op.

That’s not even the most interesting part of this story, however. Both Jennifer and Justin were wearing layers upon layers, but Jennifer’s coat definitely looked like it was concealing a bump (click here for pics). Is Jennifer Aniston pregnant? Or does she just want you to think that she’s pregnant? I mean, at least we’re seeing what could be physical evidence of a baby bump, when most tabloids just make it up on the spot.

It would also explain why Jennifer has kept her public appearances to a minimum, and why she’s not traveling as much. If she really is pregnant, that would give her a valid reason to stay hidden and stay off the grid, which she definitely did when she didn’t make many appearances during Oscar week. It’s possible that she could just have been trying to avoid Brad Pitt and Angelina Jolie, since she knew they would be regulars on the party circuit this season – but it might also have been because she didn’t want to start bump watch rumors if she didn’t sport her usually stick thin body. It sucks that women are always subject to bump watch when men can gain weight and get away with it, but Jennifer’s crafty enough that she wouldn’t wear something that revealed her ‘baby bump’ if she didn’t want the public to think she was pregnant.

Really, we won’t be able to say definitively either way until Jennifer deigns to comment on the matter. We’ll always have ‘sources’ leaking news, but if we believed the tabloids, then Jennifer would already be a single mother raising six children by herself.