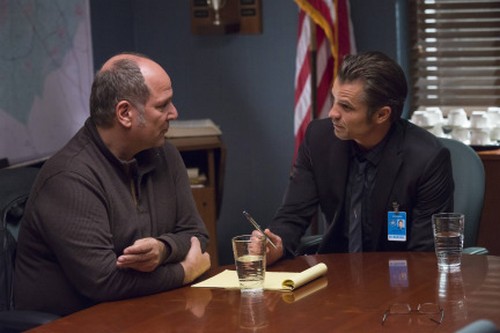 Tonight JUSTIFIED returns to the FX with a whole new episode called, “Shot All to Hell.”  On tonight’s episode a mob revenge plot threatens to expose secrets from Raylan’s past. Meanwhile, Boyd suffers a crushing defeat..  Did you watch last week’s season 5 episode 4?  We did and we recapped it right here for you.

On last week’s episode Raylan ventured into wild country on the hunt for a missing informant, while Boyd’s last living relative threatened his life and livelihood.

On tonight’s show Raylan’s secrets are at stake when a mob revenge plot descends upon Kentucky, and Boyd’s recent successes are tempered by a crushing defeat.

Tonight’s Season 5 episode looks like it is going to be great and you won’t want to miss it, so be sure to tune in for our live coverage of FX’s  Justified at 10:00 PM EST! While you wait for our recap hit the comments and let us know how excited you are about the new season of Justified?

Boyd Crawler killed someone and before he did so; he made sure to drag his victim’s name and reputation through the mud. He did so because not only did he want to kill Lee Paxton but he was to completely destroy him. Lee awoke in his bed at home after getting a call from Nick. An anonymous tip was called in about one of his business. Nick of course found a bunch of corpses stashed at the funeral home and they were all tagged to be burned. Now he’s under investigation for dealing with local gangs.

In that moment, Lee knew that Nick turned against him. He had hung up disgusted with his former ally and found someone was silently waiting for him in the dark. Boyd wanted to see Lee’s reaction and then when he was done terrifying him – he shot Lee. A straight gunshot to the head!

The bodies are piling up. Elias found Al. He wanted to know what Al told the Marshalls. Al tried to pretend Elias was confused but both men knew he wasn’t. And after a gun was pulled out, Al was ready to sing if he had to. He told Elias everything. He mentioned Sammy and even Picker. He thought if he was honest then he wouldn’t get hurt. Sadly, Al was wrong. Elias killed him the moment he no longer had use for him.

Wendy Crowe is taking Kendall to Miami. She wants her brother to live with her and before she does, she had to run it by Allison. Their case worker needed to give her final approval. She also needed to notify Raylan. Raylan showed up while Wendy and Kendal were still at Allison’s office.

Raylan hates her brothers and he can’t stand to watch her, apparently the only good Crowe, sit around and do nothing. He asked for help but didn’t get it. He tried to manipulate Kendall’s situation and Wendy chose to get him out of Kentucky.

Chief Deputy U.S. Marshal Art Mullen was following around Elias. He notices something fishy about the other man and yet was too late in actual catching him during a crime. All he does catch Elias at is surveillance. He saw Elias was studying the people inside of the diner. Mullen managed to scare off Elias by letting him know he was onto him.

Once Mullen finishes up with him he then moves on to the restaurant where he found both Wynn Duffy and Picker. Now he tried to get Picker to come with him nice and easy but someone was being mulish. However Mullen didn’t scare off Elias as much as he thought. The hired killer came into the restaurant after all demanding to have a word with Picker and he was prepared to turn the whole diner into a blood bath just to do so.

Thankfully for all the bystanders, the Marshalls in the area are known for a fast draw. No one can pull a gun faster than them. A fact Wynn made sure to pass on to Elias. The killer isn’t dumb though. He could have stayed and brazen it out when he chose to walk away. For time being that is.

Picker wasn’t ready to go anywhere but he couldn’t say no to Mullen after the man saved his life.

In the meantime, Dewey shacked himself up with a couple of hookers. He was feeling low and thought he could talk to these women about what’s been troubling him. They are the other hand aren’t used to real “conversations”. He tried to make jokes out of his nonsense. So he decided it was time to leave. Prior to do so, he wanted to leave them a reminder. He gave each of them sentimental gifts. They aren’t worth much and the girls weren’t all impressed by them.

Boyd walked into a favorite bar of his, his own, where he happened to meet Darryl Crowe Jr. Jr. didn’t know who he was when he began bad mouthing him. Still he learned quickly enough when Boyd pulled a gun.  It seems Jr. wanted to make a deal with Boyd. One where his family won the better hand. It was dumb of him to try and make a deal with Boyd. Although a gun to the face generally means no deal, he hadn’t expected rejection.  He even admitted out loud he never thought Boyd would turn him.

Of course Boyd said no. He’s working on much bigger and profitable plans that all his little fingers in the heroin trade doesn’t appear to faze him. Boyd is onto something.

Raylan wanted in on Picker’s questioning. He hasn’t forgotten what that man did to him and his ex-wife. The Marshalls want Picker’s help finding Marcos. They figured seeing as he shot his former employer’s son that he’s no longer loyal. Yet Picker won’t help them.  It doesn’t matter what his relationship with Marcos is. He knows better than to talk.

Raylan asked for a few minutes alone with. He knows the room is monitored and let’s that be the first thing Picker learned during their interrogation. But that wasn’t the threat. He reminded Picker about some hard facts. Picker can easily blackmail Raylan with all he knows because Raylan has some terrible things. And He’s capable of continuing to do these things.

Boyd made back Nick and Mrs. Paxton for their services. That money that should have gone to the Mrs. ended up going to a man’s family for services rendered. All the man had to do was kill Nick. That’s how Boyd chose to wrap up his loose ends. He then told advise the Mrs. that it would be best if she left town. You never what could happen in Harlan County!

The Crowe is family all back together. Darryl Jr. likes having his sister around. She can help reign in his brothers. That’s why he made sure to drag her out of Florida. He wants his family around him without the responsibility. But Wendy tells him that’s going to have to change. Raylan is looking to reinstate his probation just so he can’t leave Kentucky. Their family needs to find a way to get Raylan to lay off as well earn some extra cash. Kendall can’t sleep on the couch forever.

Boyd was finally going to get Ava back. She was a day away from her release when they same prison guard that’s been harassing her just happen to have something ready. He pulled one over her during his random bed check. Ava knew she wasn’t the one to put the knife under her bed but who’s going to believe?  Especially when her own cell mate was an “eye-witness” to her stabbing the guard. No one would even think twice when in truth he was the one that stabbed himself.

Mullen and Raylan followed Picker’s directions to a warehouse. They were barely in when they got ambushed by Elias and his massive assault weapon. It was only because Raylan found advantage that he was able to take out the hit man. Otherwise he and Mullen would have been caught up in a never ending stream of bullets.

Elias was in the warehouse protecting Theo. The dogs that came with the rest of their squat team was able to sniff him out within moments. While the agents are celebrating their success; Kendall has gone back to a very dangerous life. His brother, Danny, is a psycho. And no one else is willing to look out for him except for Jean. And Jean got killed for it. Danny didn’t like outsiders telling him what to do so he shot him and then made Kendall swear to keep his mouth shut.

Boyd had made a deal against good old Johnny but all of his dreams appear to be falling apart. Johnny was smart enough to make contingency plans of his own.

Picker told the agents that Agent Barkley was the federal agent out on the tarmac that night but Raylan knows he’s lying and even told Mullen so!