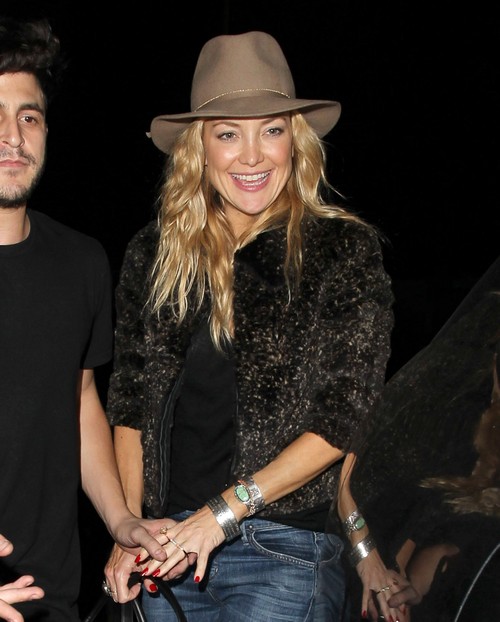 Well, that didn’t take long! Kate Hudson has long had a crush on Derek Hough, and she is finally able to make her move and start dating the Dancing with the Stars pro! Back in March we told you that Kate was after Derek after hiring him for private dance lessons. Cracks in her relationship with fiancé Matt Bellamy, who is also father of her son Bingham, have been showing for quite some time, but recently the two seemed to be back on track and seemed quite happy on a few public outings. Not the case, as CDL told you—Kate and Matt had an official breakup, called it quits and cancelled their engagement.

That left Kate open to pursue other crushes, and Derek was on the top of her list. Radar Online reports the two have already been hooking up for a little while, so friends have warned Hough to stay away—at least for now so to not be blamed for causing the breakup. Kate has been able to keep the dancer in her life for quite some time, under the veil that she wanted to learn to dance from a pro.

The movie star, who has recently released an active wear line for women, told Shape magazine earlier this year of spending time with Hough, “It’s been a real blast. My heart is really in contemporary jazz, but lately I’ve been ballroom dancing with Derek Hough.” Even as far back as 2013, the duo shared an intimate dinner date that ended with a sexy rumba.

Kate was also seen with her new man on December 8 at an LA restaurant, only a couple weeks after the she was spotted with her now ex-fiancé for the last time at her mother Goldie Hawn’s charity event.  Coincidentally, Derek happened to be in attendance as well. Though the two were not together that night, they did join one another for a photograph. While we don’t doubt Kate’s attraction and possible love of the pro hoofer, we can’t be too sure Derek will reciprocate those deep feelings. Derek has fought gay rumors for years, and has continually only dated women publicly. Only time will tell if these two will last. With the long string of men in Kate’s past and the fact that Derek continues to battle rumors he is in a relationship with fellow dancer Mark Ballas, these two may not make it past the holidays!

What do you think CDLers? Do you see these two together? Who makes a better couple…Derek and Mark or Derek and Kate? Come on….tell us what you think!