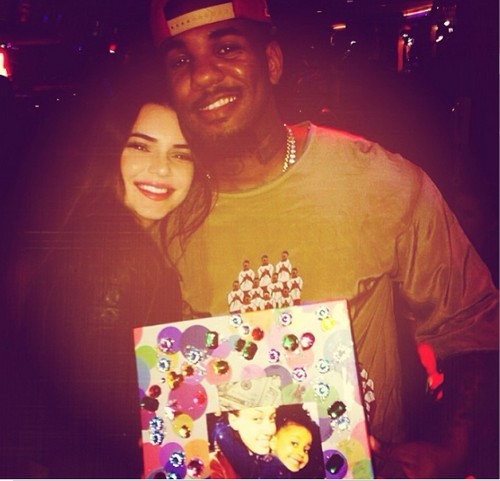 If sources are to be believed, Khloe Kardashian is pregnant but doesn’t know who the father is. Sounds about right. Khloe and Lamar Odom got divorced only a few months ago, which means the baby could easily be his. Then again, it’s just as possible that the baby’s Matt Kemp‘s or the Game‘s, considering Khloe was rumored to have had affairs with both of them as well. Actually, forget affairs, she was pretty much dating Matt as of last week. However, a new picture that has surfaced on the net might provide us clues to the paternity of Khloe’s unborn child.

Kendall Jenner and the Game were spotted posing together in a picture, looking extremely close for two people who have the vaguest of connections. However, if the Game actually was Khloe’s baby daddy, it would make sense that he would be bonding with the Kardashian family, considering he himself would be joining it pretty soon. If the baby’s his, then that’s pretty much his honorary addition to the Kardashians, which he’ll no doubt regret soon enough.

Of course, this all has to be taken on good faith, considering that Lamar might still try to wreak havoc if he finds out the baby’s not his. Unfortunately for him, Khloe hasn’t exactly been sitting at home and pining for him after their divorce. Even if he demands a paternity test, it looks like the Kardashians have already decided who they’re welcoming into the fold.

What do you guys think? Could the Game be the father of Khloe’s unborn child, or is it Matt or Lamar? Let us know your thoughts in the comments.