Kristen Stewart and Nicholas Hoult Dating: Robert Pattinson Relationship Was Too Much Drama 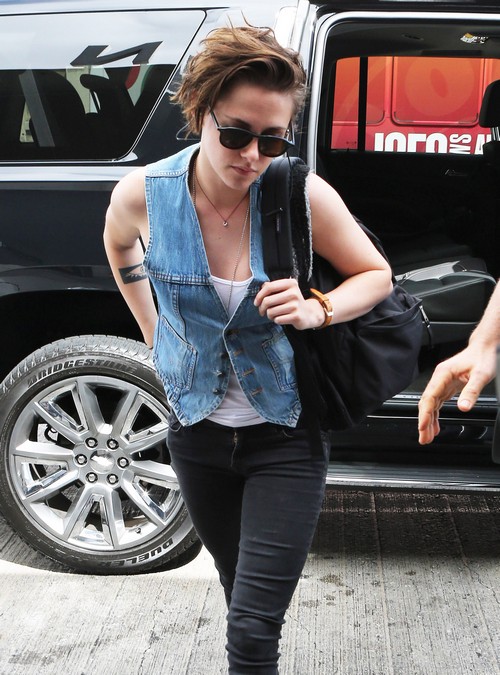 Kristen Stewart and Nicholas Hoult remain undercover in their romantic liaisons, staying outside of the US while shooting Equals in Japan. Now that Robert Pattinson has a new girlfriend [FKA Twigs], Kristen is no doubt relieved that the press will finally stop linking her to the defunct Robsten relationship. But at the same time, I imagine that Kristen and Nick probably have a much more easygoing relationship than Rob and Kristen ever did.

Even if Kristen Stewart and Nicholas Hoult are not dating, there’s no pressure on them to deliver the most epic romance of all times a la Twilight. They’re able to shoot Equals out of the public eye, in a country [and continent] with limited paparazzi access, and without the disadvantage of a rabid fan following.

Think about it – did the craziness surrounding Twilight help or hinder Robsten materialize, you think? I’m leaning towards the public pressure hurting Kristen’s relationship with Robert Pattinson, which is probably one of the factors that lead to their breakup. If they weren’t ‘Kristen Stewart’ and ‘Robert Pattinson’ from Twilight fame, who could have said if they stayed together after the cheating scandal? Or whether that cheating scandal would have even happened?

Any way you slice it, Kristen’s moved on from Rob, and from all the signs, her next Hollywood BF could be Nicholas Hoult. I know it’s thinking way ahead of the game, but could you guys see their friendship/co-star relationship becoming more serious? I always thought that Nick would end up engaged to Jennifer Lawrence, but with her dating Chris Martin, I can see the potential in a Nick/Kristen pairing. For one thing, the guy just oozes a laid-back attitude, and unlike Rob, doesn’t come with a perennial air of insecurity. A personality trait that will attract the equally confident Kristen Stewart, perhaps?