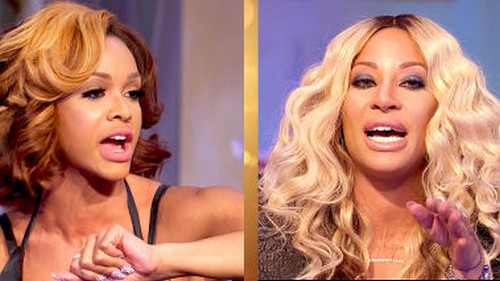 Tonight on VH1 their new series Love & Hip Hop Hollywood continues with an all new Monday December 8, season 1 episode 13 called “Reunion Part 1,” and we have your recap below. On tonight’s episode, it’ll be the first part of the reunion.

On the last episode, Fizz and Moneice set out to repair their relationship. Elsewhere, Omarion sought a musical reconnection with mentor Rick Ross; Hazel faced Masika in a final showdown; Ray and Princess hit a crucial point in their relationship. Did you watch the last episode? If you missed it, we have a full and detailed recap right here for you.

On tonight’s episode as per the VH1 synopsis, “it’ll be the first part of the reunion episode where everyone will get together and talk about what’s happened this season.”

It almost feels like the same old fight is being continued on tonight’s supposedly all new episode of “Love & Hip Hop Hollywood”. Part one of the reunion had the esteemed Mona Scott open up tonight’s discussion with talk about the many love triangles that have happened both behind the scenes and on screen. And, naturally, that particular hot button led to a fight.

This season we saw Teairra and Ray J’s relationship swing from one ugly fight to another. Yet by the end of filming, the two of them appeared to reconciling. They were hanging out and Ray was handing out gifts like Father Christmas. So it looked like they were back on track.

But, sadly, that is now no longer the case with them. Subsequently, after the season has wrapped up, Ray J has returned to his ex Princess. Princess and Ray had broken up because he felt like he couldn’t trust her to keep their secrets to herself. However, he’s clearly had a change of heart about her and possibly his relationship with Morgan.

Morgan had been the one to tell him about Princess. Yet, afterwards, Ray was accusing of gossiping as well.

Ray believes Morgan had turned around and told Teairra everything Princess has told her. So at the moment he’s upset with Morgan and he refuses to believe either her or Teairra when they try to tell him they weren’t like Princess. Though, currently, Ray has no problem with Princess. In fact they look like they’re back together – for good this time. Plus Princess has even gone on the record to say she would take Ray back no matter what.

And as for other toxic relationships, Mona then moved on to discuss Hazel E and Yung Berg. Berg and Hazel have known each other and have been in each other’s lives for over 8 years. Yet when the time came for Berg to commit – he chose to instead humiliate Hazel by flaunting other women in her face.

Berg chose to dismiss his entire relationship with Hazel and soon he had Masika doing the same. Though there is one good thing came from their betrayal – Hazel met Nikki and the two of them found common ground in hating Masika.

Masika tries to shake if off but she can’t help herself from confronting Nikki. And the two women probably had some very interesting things to say to each other yet it would never know it because honestly it’s hard to decipher an all-out screaming match.

The women were shouting back and forth. And no one was hearing a thing. So Mona decided to get to the bottom of their fight. She asked them about Mally Mall.

Mally was Nikki for nearly two years and then the two went on a break. During that break, Mally chose to hook up with Masika and according to her he was serious about their relationship. Then Nikki and Mally got back together and she decided to ask him about this woman who’s putting up pictures of him on her Instagram.

Mally had denied anything happened and so Nikki chose to believe him. But then later on, Masika revealed a certain knowledge about Mally and right away Nikki knew Mally had lied to her. So she ended their relationship (hence there’s some bad blood between Nikki and Masika) and then she proceeded to go about dating. Where, last we checked, she was interested in Fizz.

Regarding Mally, Nikki has spoken to him and they’re friendly. But that’s as far as part one of the reunion got. A fight broke out right afterwards and now we’ll have to wait a whole week to see who came out the winner.

And in other news, VH1 has issued a statement about one of their stars. Yung Berg was recently brought up on charges for assaulting his girlfriend Masika and because of that he’s been let go from the show.