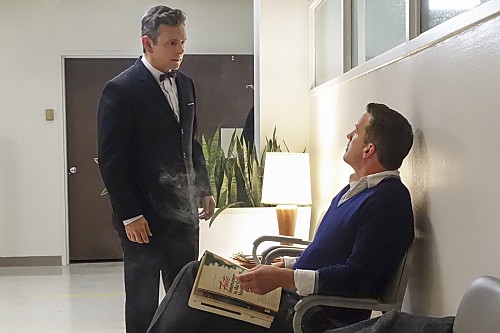 Tonight on Showtime MASTERS OF SEX continues with a new episode. On tonight’s show called, “Fight” Virginia learns about Masters’ troubled childhood when they meet at a hotel for a secret rendezvous.

On the last episode Masters began a new job at Memorial Hospital – under Betty’s terms – only to find his boss insisting he leave Virginia behind in favor of a handpicked secretary. Johnson, meanwhile, still alienated at Maternity, was torn between pressing Masters to rehire her and staying by DePaul’s side as her condition worsened.

On tonight’s show Virginia and Masters’ meet up at a hotel, during their time there she learns more about him and the problems that he experienced during his childhood.

We will be covering Masters of Sex tonight at 10PM EST so don’t forget to come back to this site for our full and detailed recap. Make sure to refresh often to get the most recent details. While you wait for the recap let us know how you are enjoying this season of Masters of Sex.

Dr. Masters had to deal with a very ambiguous case especially for his time. A baby was born at his hospital with both female and male genitals. And while Masters sympathizes with the parents – he can’t deal with the baby’s father’s demands.

The baby’s blood tests show that the baby is a boy. However the father doesn’t want to hear about testosterone treatment seeing as they don’t offer any reassurances that his son will grow up to be normal as in one day be able to perform. So he wanted the doctor to remove the male genitals. He rather have a daughter than a son with possible feminine traits.

Yet Masters refused him. He wasn’t an expert on such cases and he felt the father wasn’t hearing all the options that could be out there – he just wanted to make a snap judgment in order to save himself from “further” embarrassment when their respective families start asking about the baby. So Masters ignored the man’s wishes and then chose to vent, not to his wife, but to Virginia.

They’re still meeting up in hotel rooms pretending to be a married couple. Even though they can’t even pretend outside sex to be one.

Masters is always ready to discuss medical cases or their sex study and yet he stops just short of actually delving anything important about himself or his childhood he’s so close lipped about. So they skirt around what they can’t say by making light of what they’re doing. They tell each other jokes about Mrs. and Dr. Holden. Even going as far to give their personas background stories.

The stories didn’t last long nor were they very entertaining towards the end. The stories had begun to turn into real-life versions and Virginia’s past wasn’t always sunshine. And so they stopped trying to distract themselves with that and got caught up in watching TV.

Boxing was on and they both had interest in it. Virginia’s father used to be an enthusiast and Masters boxed a little back during his boarding school days. So he knew about the technicalities behind it and Virginia asked him to show her how to box. Although, that didn’t end well either!

Virginia lost the match and didn’t take losing lightly. She was complaining about it being unfair when Masters told her what true unfairness looked like. He learned how to box from his father and the older man didn’t take it easy on him. Masters’s father was abusive. He used to beat Masters at any chance he got until one day Masters was virtually abandoned by him.

Masters had told Virginia about how his father broke his nose. It was one of their last interactions and Virginia for some reason was curious. She wanted to know the reason behind the broken nose. What pushed his father over the edge that day? And all Masters could reply was that he couldn’t remember. Most of his beatings were done as a test. His father explained once that with his way Masters could grow up to be a man and that’s why the situation earlier with the overbearing father was so familiar. He knows all about fathers who have firm definitions on what sons should be.

After he and Virginia were done at the hotel, he called to check in at the hospital and the nurse told him what happened to his patient. The father found another doctor, a general surgeon with no idea or experience with such a case, to perform the surgery he wanted. It seems he didn’t want to leave the hospital with an “it” so he decided to leave with a daughter despite her test results saying she was a boy.

It was better “to dig a hole” or so he says when Masters rushed back to the hospital in attempt to talk him out of doing the surgery. Now that child could grow up forever scarred because its father only cared about appearances.