Nashville Spoilers Round-Up and Preview: See What Happens in Season 2B (VIDEO) 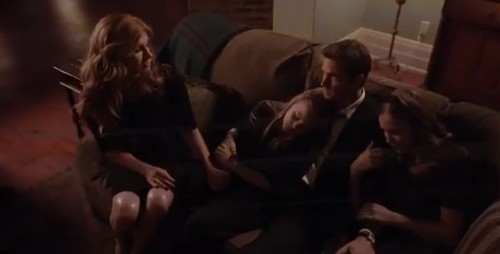 Nashville is set to return to ABC on Wednesday, January 15th, at 10:00 PM. In true Nashville soap-opera fashion we were blessed with an over-the-top cliff-hanger during the mid-season finale. Read on to see which Nashville character didn’t survive the midseason finale, and more Nashville Season 2B spoilers.

In the Nashville Season 2A finale two main characters faced death. Will toyed with the idea of committing suicide and Peggy took a bullet that was meant for her husband. Rumor has it only one of those characters will survive the midseason finale, and our money is on Will. ABC and the Nashville cast has kept mum on the potential deaths, but if you take a look at IMDB Peggy isn’t listed to appear in any of the Season 2B episodes, while Will is slated to appear multiple times. It looks like Peggy is a goner.

That’s right there may be a “Teddy and Rayna” again. With Peggy out of the picture and Teddy reevaluating his life after his near death experience, the pair could potentially be facing a reconciliation.

According to the official synopsis for the Season 2B premiere, Deacon will be spending some quality time with his daughter Maddie. “Deacon struggles to write during his sobriety and relative stability and finds help from Maddie and Daphne.”

Juliette just can’t seem to catch a break! In the Nashville Season 2B Winter premiere the country starlet (Hayden Panettiere) will be facing another press fiasco. A dedicated ant-Juliette activist has done some creative video-editing, and released a tape of Juliette proclaiming “there is no God,” which doesn’t settle well with country music fans.

Luke And Rayna Aren’t Over

In the beginning of the Season 2A finale Luke and Rayna made their relationship official, and then by the end of the finale it appeared that the couple had broken up. According to Dee Johnson, the executive producer, they are just reevaluating their relationship, because after they made it official they realized they have a lot of differences. According to the EP they are not officially broken up yet, so there is still a potential future for Luke and Rayna.

Rayna’s sister Tandy has been keeping a dark secret about their father Lamar from Rayna, and now that Peggy has been shot, the secret will probably show its ugly head. In an interview with TV Line executive producer Dee Johnson sounded off on the matter, “The idea that she’s essentially protecting Rayna is what kept her going, but the pressure of lying over such a long period of time to someone she’s that close to is definitely going to have some psychological blowback for her.” Yikes, “psychological blow-back” doesn’t sound good.

You know that hot moment where Juliette showed up on Avery’s doorstep, and for a minute we all thought they were going to hook-up, and then Scarlett interrupted them. Well, according to Dee Johnson (EP) we weren’t imagining anything, and there is very much a chance of Juliette and Avery hooking up in Season 2B.