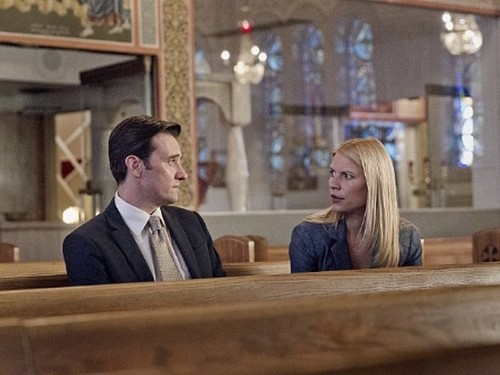 Tonight’s episode of HOMELAND was not as exciting as the previous week, we got to see Saul manage to pull off his high-stakes gamble but at the same time he lost some of Quinn and Carrie’s confidence in him.  I cannot wait to see where they go with it next week.  Good news, we have managed to get our hands on a sneak peek video and a few spoilers to whet your appetite as you wait  for next week’s episode 8 “A Red Wheelbarrow.”

On tonight’s episode Saul makes a gamble in his quest to take Javadi down.  Saul made some alliances.  Saul made a plea because he saysit was a once in a lifetime operation that could transform everything.  Carrie and Quinn scrambled to contain a local police investigation; and Mira came to a crossroad in her marriage and faced some hardcore turbulence.  Did you watch tonight’s episode?  We have a full and detailed recap, right here for you.

Spoiler alert: If you’re one of those people who doesn’t like spoilers, stop reading now! We have some juicy spoilers for you about the season 3 episode 8 of Showtime’s “Homeland”

Official Showtime synopsis of next week’s episode: “Carrie and Quinn pursue a key suspect in the Langley bombing. Saul contends with political backlash. The intelligence job takes a toll on Fara.”

On next week’s show they finally have a Langley bombing suspect and Quinn and Carrie go after them.  BUT it looks like they want to take the suspect out and Carrie is not pleased, Saul promised she could question him.  Carrie being Carrie heads out to stop the kill and Quinn warns her he will take the shot even with her in the way.  Yikes!  So Quinn and Carrie are at odds.  It seems Quinn has changed alliances.  Carrie has spent this whole season trying to prove Brody’s innocence and she is unwilling to stop now.  The Brody family is going to get a huge shock next week.

Homeland season 3 episode 8, “A Red Wheelbarrow”  airs on Showtime on November 17th, 2013. Check out the preview video below and some photos of season 3 episode 8 and let us know in the comments below what you think!  Are you enjoying season 3 of Homeland?