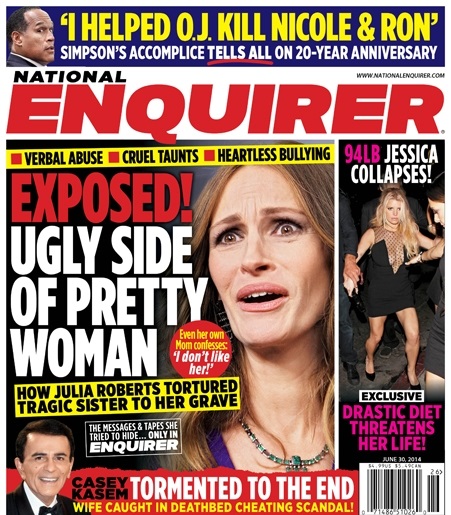 Twenty years after the double murders of Nicole Brown Simpson and Ron Goldman, it was inevitable that the case would start to grab headlines again. All of the key players involved in the case have made the morning television rounds and the media has seemed to want to latch onto any potential twist in the case that may have been previously undiscovered. It has been rumored that O.J. Simpson had an accomplice because a second knife was found at the scene.

National Enquirer has been extra ambitious with its coverage and in the June 30th print edition they have an interview with O.J.’s supposed accomplice. This person contends that they were indeed involved and that O.J. has opted to protect them from being held accountable. Do you think that it’s possible that O.J. could have been protecting someone else for all of these years?

Julia Roberts has been catching some really lousy headlines ever since her step sister, Nancy Motes, committed suicide last February. Nancy had talked to the press about Julia’s bullying behavior and it is rumored that she tormented her right up until the day that she died.

According to the new issue of National Enquirer, even Julia’s own mother admits that she doesn’t exactly like her own daughter at times! We have heard that Julia’s marriage to Danny Moder has also taken a hit thanks to her nasty behavior. Apparently America’s sweetheart isn’t all that nice and no one is sweeping it under the rug any more.

Jessica Simpson‘s weight loss has been catching attention these past few weeks because the mom of two suddenly looks fantastic, but is her diet safe? Apparently, not as the star has dropped to 94 pounds and those close to Jess are now afraid that she has begun to put her health at risk.