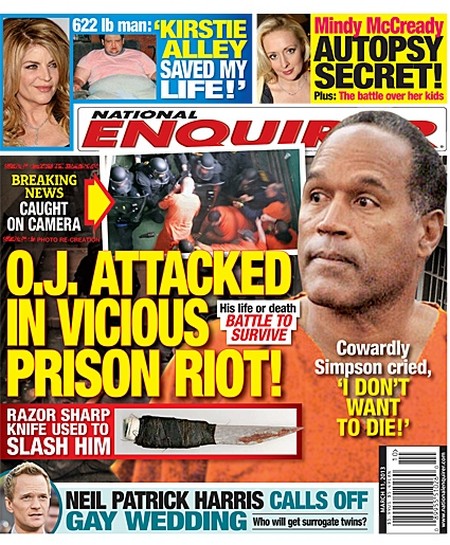 Who says karma doesn’t catch up with people eventually? It looks like O.J. Simpson had a really close call recently and could have easily died in spite of being in a locked prison! The always-suspected double murderer found himself tangled up in a prison riot that left him actually pleading for his life! According to The National Enquirer OJ was slashed with a homemade knife and the whole thing was actually caught on camera at the Lovelock Correctional Center in Nevada.

According to the Enquirer O.J. actually cried “Please, I don’t want to die!” which is kind of ironic, don’t you think, all things considered?  OJ is currently serving nine years — and perhaps the rest of his life for an armed robbery in a hotel room. A sentence that brought slight satisfaction to those who believed the football star got away with murder more than a decade ago.

OJ has also been in the news lately because there are rumblings that he could actually be Khloe Kardashian’s real father. Apparently Kris Jenner had no problem screwing her best friend’s husband a few decades ago! His children with Nicole have feared that their father is getting ready to change his will to include Khloe now as well as them.

Are you shocked to learn that OJ acted like a big baby when his life was on the line? Isn’t that what happens a lot? These guys are so vicious until they run into someone with the upper hand and then they turn into big babies! At 65 years old there is a decent chance that OJ could die in prison. His original sentence was for 33 years, but with good behavior he would be granted freedom in less than ten. Will he live long enough to see a blue sky again?