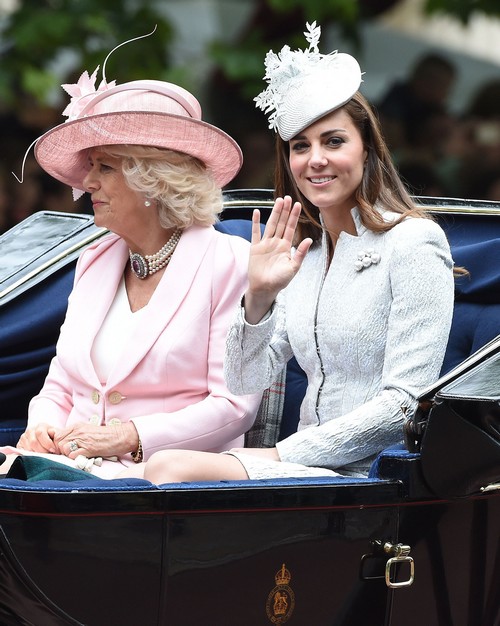 Kate Middleton is pregnant with her second child, and rumor has it that The Duchess of Cambridge and Prince William are hoping for a baby girl. While balancing off their young family with a sister for Prince George would undoubtedly make Kate and Prince William ecstatic with joy, this outcome is bound to create less delighted reactions in particular family members.

Who are we referring to? Why, Camilla Parker-Bowles, of course. Camilla’s always had a contentious relationship with the rest of the royals, largely because the ghost of Princess Diana is still hanging over the family.

Now, if Kate Middleton and Will do have a girl, sources close to the couple say that they are keen on naming her Diana, after Will’s mother –  Camilla realizes that the child would be known as Princess Diana! This has been mentioned before, and I think it’s extremely likely that they would name their baby girl Diana. Will and Kate would want to honor his mother, and what better way than to name their child after her?

However, naming the baby girl Diana is a surefire way to alienate members of the royal family who weren’t Diana’s biggest fans – namely, Camilla. Naming the child Princess Diana will throw right up into Camilla Parker-Bowles’ and Prince Charles’ faces their cheating affair and the ensuing scandal – not to mention Diana’s tragic death which some still blame on Prince Charles. There’s no denying that she’ll be furious if Will and Kate go through with that. She’s already on tenterhooks, waiting for Prince Charles to get the throne from Elizabeth. There’s already a risk that Queen Elizabeth will pass the throne down to Will and Kate, skipping her and Charles in the process. And now, she has to deal with yet another complication concerning Will and Kate’s royal brood.

In public, she’ll of course coo and ahh over the baby, and perhaps even in private. But every time she looks at ‘Diana’, she’ll be reminded of Princess Diana and everything that happened between them, and Charles. Bitter doesn’t even begin to describe what she’ll be feeling in that regard, but what can she do? Absolutely nothing, and she knows it.