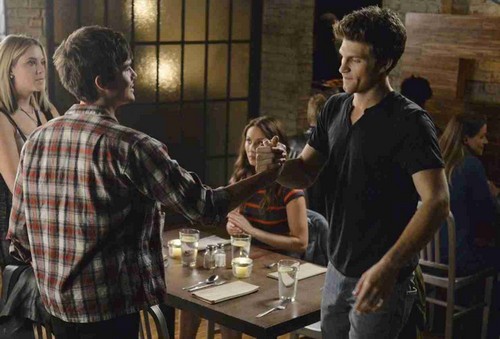 Pretty Little Liars continues to be one of the my favorite series, another amazing episode!  Can you believe Alison set up the whole thing and paid Cyrus to confess to kidnapping her?  If you are like me and you are anxiously awaiting each episode, we have managed to get our hands on a sneak peek video and some spoilers to whet your appetite for next week’s episode 11 called “No One Here Can Love or Understand Me.”

On tonight’s episode, the pressure was on for Alison to identify the man police had in custody for her kidnapping, but the Liars knew if she did it would be sending an innocent man to prison and possibly walking right into an “A” trap. With Emily trying to convince Ali not to play into “A’s” hand, Spencer came up with a plan B in case Ali decided to make the wrong decision Ali’s games might have pushed her friends too far when an innocent man’s life was put in the balance.  Meanwhile, fed up with all of the Ali drama, Hanna tried to lead a “normal” teenage life.  And lots more happened — did you watch the episode? If you missed it we have a full and detailed recap, right here for you.

Spoiler alert: If you’re one of those people who doesn’t like spoilers, stop reading now! We have some juicy spoilers for you about the season 5 episode 11 of ABC Family’s “Pretty Little Liars.”

Official ABC Family synopsis of next week’s episode: “Melissa finally tells Spencer what she knows regarding the night Ali disappeared. But what is Spencer supposed to do with the knowledge? Knowing something is off about Alison’s story, Emily is on the hunt for answers on her own. She enlists Ezra’s help in finding out more about Cyrus and his past connection to Alison.”

On next week’s episode Melissa’s secrets are finally revealed while Hanna demands the truth about Ravenswood from Caleb.  Meanwhile, Hanna asks Spencer and Toby for help with Caleb’s drinking problem.