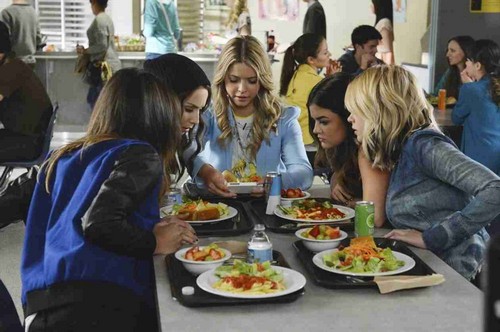 Pretty Little Liars continues to be one of the my favorite series, and I’ve been watching each and every episode with great excitement, anticipating the amazing twists week after week.  On tonight’s episode, it was the 100th episode  and it did not disappoint.  If you are like me and you are anxiously awaiting each episode, we have managed to get our hands on a sneak peek video and some spoilers to whet your appetite for next week’s episode 6 called “Run, Ali, Run.”

On tonight’s episode, the day had finally arrived – Alison’s first day back at Rosewood High, and neither the PLLs nor Alison were really ready for it. Determined to put on a brave face, Alison returned to also help heal the damage she did years ago. But were apologies enough for those who Alison had hurt in the past? Not if Mona and her army had anything to say about it.  Meanwhile, Caleb and an old foe returned to Rosewood.  And lots more happened — did you watch the episode?  If you missed it we have a full and detailed recap, right here for you.

Spoiler alert: If you’re one of those people who doesn’t like spoilers, stop reading now! We have some juicy spoilers for you about the season 5 episode 6 of ABC Family’s “Pretty Little Liars.”

Official ABC Family synopsis of next week’s episode: “With the town of Rosewood trying to get back to normal, the PLLs – especially Ali – are far from okay after the latest ‘accident.’ Thinking that it wasn’t the right decision to come home after all, Ali starts to consider leaving for good. But Aria, Emily, Hanna and Spencer are determined to keep her safe in Rosewood and to figure out who and what is behind this latest incident. “

On next week’s episode they say you can’t go home again. Alison is spooked after the most recent Rosewood “accident” and wonders if she should have come back after all.  Meanwhile, Caleb also starts second-guessing his return, and Ezra dives into his research to help find answers.