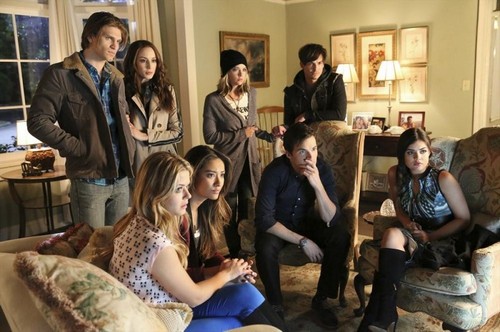 Pretty Little Liars continues to be one of the best series on ABC Family, and we’ve been watching each and every episode with great excitement, anticipating the amazing twists week after week.  On tonight’s episode, Ali attempted to regain the role of group leader, but she found her four friends weren’t too willing to follow her blindly — not like they did before.

If you are like me and you are anxiously awaiting each episode, we have managed to get our hands on a sneak peek video and some spoilers to whet your appetite for next week’s episode 5 called “Miss Me x 100.”

On tonight’s episode, Ali, now that she’s back in Rosewood, attempted to regain the role of leader of the group, but she found her four friends were not as willing to blindly follow her every whim as they once were. While most kids were morbidly curious about what happened to Ali, some were more focused on planning for Ali’s return to school.  And lots more happened — did you watch the episode?  If you missed it we have a full and detailed recap, right here for you.

Spoiler alert: If you’re one of those people who doesn’t like spoilers, stop reading now! We have some juicy spoilers for you about the season 5 episode 5 of ABC Family’s “Pretty Little Liars.”

Official ABC Family synopsis of next week’s episode: “The day has finally arrived – Alison’s first day back at Rosewood High, and neither the PLLs nor Alison are really ready for it. Determined to put on a brave face, Alison returns to also help heal the damage she did years ago. But are apologies enough for those who Alison has hurt in the past? Not if Mona and her army have anything to say about it.  Meanwhile, Caleb and an old foe return to Rosewood.”

On next week’s episode ready or not the Queen Bee returns to school in the 100th episode.  Its Alison’s first day back at Rosewood High and Mona and her army are ready. In the video clip, we see Ali and Mona go at it and things might end badly — as things usually do.