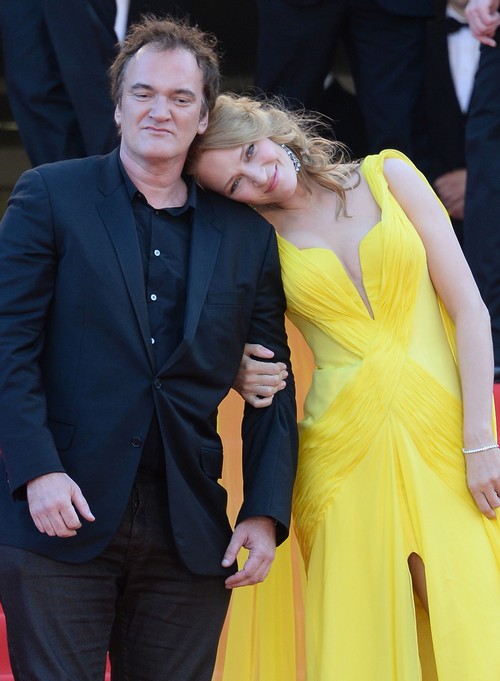 To the surprise of absolutely nobody, Uma Thurman and Quentin Tarantino are dating. Seriously, Quentin’s even gone on the record saying how much he loves Uma, even calling her his ‘muse‘. It’s always been obvious that he’s had a crush on her, and there have been plenty of rumors of them hooking up in the past. The only difference is that the Internet is around to witness it this time.

Uma recently ended her engagement to millionaire Arpad Busson and I guess Quentin stopped chasing Christina Aguilera, so the timing worked out perfectly. As a source explains to US Weekly, “They had a thing and got together again recently. He’s loved her for years. There has always been an attraction. She has indulged from time to time, and that’s how their relationship has always worked.”

Unfortunately for Quentin, Uma’s never stayed single for long, first getting married to Ethan Hawke in 1998, and then getting engaged to Arpad recently. They may have had flings in between her relationships [and perhaps even overlapping them], but she never seemed interested in a relationship with Quentin – until now. Even during the making of Kill Bill when the rumors went rampant, Quentin always established that there was nothing serious going on between them, although he would always add that they both ‘loved’ each other. So I guess Uma finally gave in?

If you think about the timeline of their relationship, it’s really not surprising that they’ve finally gotten together. They first met before shooting Pulp Fiction, and Uma had to be convinced to take the role, even though it ended up catapulting her into the spotlight. But since then, they’ve always been close, and it’s seemed inevitable that they would end up together eventually. Now we’ll just have to see how long their romance actually lasts.