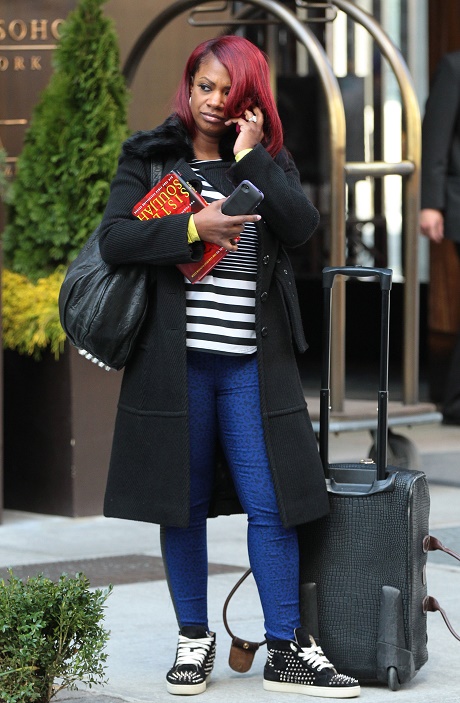 Is Real Housewives of Atlanta star Kandi Burruss pregnant and expecting a baby with Todd Tucker? It’s no secret that Kandi and her new hubby, Todd Tucker, whom she married in July 2014, wanted to start trying to get pregnant immediately after their nuptials. After all, Kandi is 38 years old and with every year that passes the odds of her being able to conceive grow less and less likely. The RHOA couple spurred rumors that they were pregnant earlier this fall when they were spotted shopping for baby clothes, but Kandi’s mother, Mama Joyce, insisted the couple wasn’t expecting yet – but they were trying.

Kandi Burruss and her hubby, Todd Tucker, a RHOA producer, attended a Real Housewives of Atlanta viewing party on Sunday, November 9th. Todd and his friends were throwing back drinks all night; however, Kandi was noticeably avoiding the alcohol. Several sources at the party are reporting that Kandi was drinking water all night, and the reality TV star looked as if she had packed on a few pounds.

Now, some could argue that the reason Kandi isn’t drinking alcohol is just a precautionary measure in case it turns out she is pregnant, seeing as how she and her husband have been actively trying to conceive. But, if you take in to consideration the fact that she appears to have gained a few pounds and was also shopping for baby clothes, it seems pretty obvious that Burruss is pregnant. She and Todd are most likely waiting to announce their pregnancy on RHOA or use it to drum up publicity.

What do you think, Real Housewives fans? Is Kandi Burruss pregnant? Why else would she be turning down drinks and pounding water? Do you think they are waiting to announce the news on RHOA? Let us know what you think in the comments below!