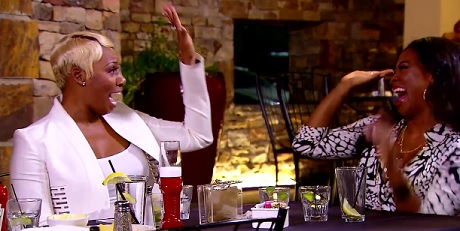 Real Housewives of Atlanta Season 7 spoilers have been leaking left and right. Rumors have been running rampant regarding which members of the cast are returning, who has been fired, and what new housewives have been hired. On October 2nd Bravo released the official Season 7 promo video, and it looks like there has been a major cast overhaul, and the spoiler video teases a ton of new drama for the upcoming season. Real Housewives of Atlanta spoilers reveal the new cast: Claudia Jordan, Demetria Mckinney, Nene Leakes, Phaedra Parks, Kandi Burruss, Kenya Moore, and Cynthia Baily make up the full-time housewives.

Rumors were running rampant that Porsha Williams had been fired from the Real Housewives of Atlanta cast, and the new RHOA spoiler video confirms that she has indeed been demoted. She is no longer a series regular, however she will appear in a few episodes of Season 7 as a “friend” of the housewives. Translation? Whenever there is a party she will pop up in the background and drop some sort of bomb on her ex-castmates to try and remain relevant.

Real Housewives of Atlanta spoilers reveal that there are two new women joining Nene Leakes, Phaedra Parks, Kandi Burruss, Kenya Moore, and Cynthia Baily. The new cast additions include Kenya’s old friend Claudia Jordan and actress and singer Demetria Mckinney. You can see Claudia and Demetria in the all new RHOA promo video, which also includes clips of Nene crying while Cynthia burns their “friend contract,” Apollo Nida freaking out when he learns Phaedra Parks is having an affair with a man named “Chocolate,” and the RHOA clearly are not fans of their new co-star Claudia. And, of course, it wouldn’t be a Real housewives of Atlanta spoiler video without fists flying and brawls.

So RHOA fans, what do you think of the new housewives, Claudia and Demetria? Are you happy Porsha Stewart has been demoted? Will you be tuning in to the Season 7 premiere on November 9th? Check out the promo and let us know what you think, and don’t forget to check CDL for all of your Real Housewives of Atlanta spoilers!