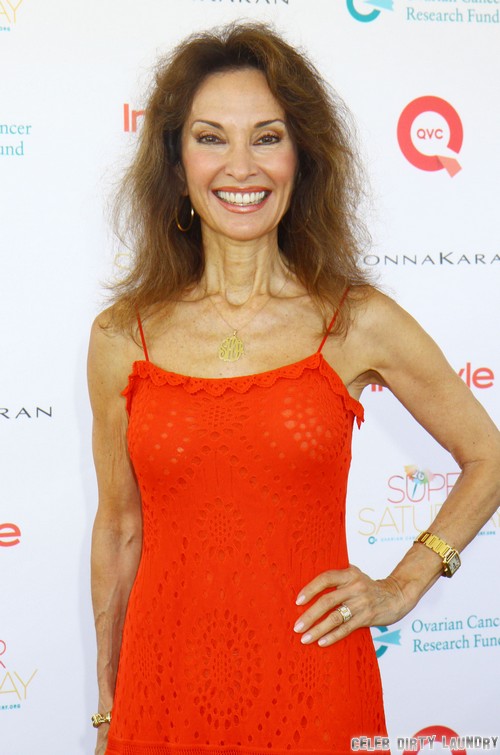 The Young and the Restless is in trouble. No, it’s not teetering on the edge of cancellation, yet. But the ratings are way down, decades-long fans are tuning out and show runner Jill Farren Phelps knows that she needs to do something quick. She has taken a lot of heat for treating female characters (and the actresses that portray them) badly and finally seems to realize that she needs to do something to change people’s perception of her. According to the April 7th print edition of GLOBE Magazine Jill has made one hell of an offer to Susan Lucci. For all the details be sure to get this week’s copy of GLOBE.

Lucci has always been extremely loyal to All My Children. She spent 41 years with the show and took work outside of daytime while waiting to see if the rebooted version of the show was going to work. Now that AMC is good and dead with absolutely no tangible way of resurrecting it, Susan feels better about contemplating doing another daytime show and is said to be seriously mulling over the Y&R offer. She was reassured that her character would be a smart business woman with a front-burner storyline. That sounds kind of like her role of Erica Kane, right?

This is like a multi-tiered power move on Jill’s part. Lucci brings instant credibility to the show and she is a power player. Then there is that legion of fans that really wishes she would come back to daytime. Y&R needs a real lift in the ratings and bringing Lucci in would likely be a nice boost. However fans have reacted for the most part negatively to JFP’s attempt to buy back their devotion by hiring Lucci. Representative comments on Soap Opera Spy shown below indicate that fans feel that nothing short of the return of Michael Muhney and Billy Miller will fix Y&R – many people seem to feel strongly that Jill is ruining the show and needs to go.

So glad I quit watching this show in December. I cannot believe I wasted 31 years of my life watching this. The solution is very simple. Bring back Billy Miller and Michael Muhney, end of story. Bringing Susan Lucci to the show and recasting MM would be even more insulting in my opinion. It is truly appalling what has happened to this show.

This is so stupid – who needs Lucci – they know how to fix it…FIRST FIRE JFP THEN D TOM AND A FEW OTHER DEAD WEIGHTS. TOO LATE MM AND BM probably would not come back if begged but at least the awful actors would be gone i.e., winters clan, dictor, chipmunk, chloe, …..find NEW PPL/NEW STORYLINES then they wont have to repeat repeat repeat..

Jill Farren Phelps has already hurt the show worse than it ever has been hurt..get her off there before she completely destroys it…As far as many of us are concerned..get MM back in there if he will come..and get rid of Phelps..

Really!? sorry the fans are not that foolish to fall for this!!! Bring Michael Muhney back and we may reconsider….if you refuse to bring him back..then do everything to clear his name so he can get on with his life!! Meanwhile with all the new faces on that program, it’s more like a circus with flat boring story lines than anything else…and if Susan Lucci was smart. she would steer clear of the mess JFP and TPTB have created!!!!

This comment really captures the sentiment that’s out there on Y&R and all the issues facing the show:

It’s not about who she might bring to the program, it’s about who she needs to bring “back” to the program Who cares about Susan Lucci? Instead of making a “huge” offer to her, make huge offers to the three main characters who have been booted off in recent months. I’m getting sicker of it everyday and practically throw up with the pitiful characters who have replaced those who have left. And now they are going to have Victoria get involved with another guy. NO WAY. There is no one for Victoria other than Billy, Billy Miller that is!!!! And this Kelly chick needs to check out!!

So what do you think? Is Susan Lucci the answer to what ails Y&R? It seems that what fans really want is a few of the fired stars back – not an attempt by JFP to boost the show by bringing in a former star of another soap! Check out these additional comments on SOS and you’ll see that without a return of Michael Muhney and Billy Miller many fans will continue to bear resentment for Jill and The Young and the Restless – people really son’t seem to want Susan.

Bring back MM & the fans will come back . Susan Lucci, not so much, looks good but to old. Otherwise, soap graveyard for you. Own up to your mistakes. Can’t be saved without MM.

We have been watching this show since Terry Lester was Jack, in our family it is one of the only soaps that even the men will watch, yong and old. My husband has been consistently watching since he retired, but since billy, and Adam and Phyllis have disappeared he has decided that work would be more appealing than retirement! Bring them back! Don’t change success for mediocrity!

NO – anybody but that self-absorbed botox-ed-out washed out Diva….please, no way…..sorry to be so opinionated……

Without MM and Billy Miller and having consistent bad story lines , just adding another star will NOT improve anything…need to listen to long time viewers!

I hope not, Susan Lucci, as good as she is, cant get viewers back, don’t want her on Y&R…

it’s smart to express your opinions on this attempted move by JFP – the powers that be read sites like ours (they don’t always listen to what people say, mind you) – so if they think they can buy fans’ loyalty back by hiring Lucci – it seems they are sadly mistaken!

Well folks, what’s the verdict?  Do you want Susan hired? Or is that a band aid that just isn’t going to work? It seems that bringing on a soap icon might not be the medicine the doctor ordered. All fans seem to want is the return of fan favorites MM and Bill Miller. Sound off in the comments below!