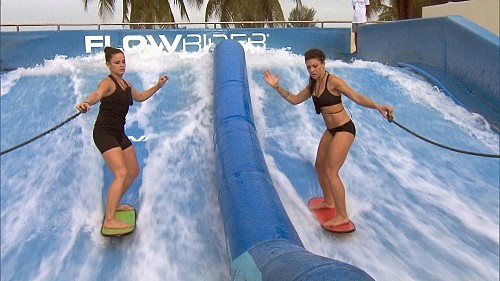 Tonight on CBS the Emmy award winning show The Amazing Race hosted by Phil Keoghan returns for yet another exciting installment in an all new Friday November 28, season 25 episode 9 called, “You’re Taking My Tan Off” and we have your weekly recap below.  On tonight’s episode, the race continues in Singapore where a dangerous misstep leaves one competitor dangling 600 feet above the ground. Also: A traditional Asian detox leaves some teams writhing in pain.

On the last episode, for the first time in series history, the show traveled to Valletta, Malta, where teams were thrown off balance when challenged to serve drinks to the knights of Malta. Also, a blind detour left Racers on a slippery slope. Did youwatch the last episode? If you missed it, we have a full and detailed recap right here for you.

On tonight’s episode as per the CBS synopsis, “one dangerous misstep leaves a Racer dangling 600 feet high in the Singapore sky, while a traditional Asian detox leaves several Teams writhing in pain.”

#AmazingRace ended last time in Malta with Tim and Te Jay being ejected for coming in last. Bethany and Adam took first last time, won some fat stacks and will leave first on this leg from Fort Manuel and 18th century fort at at 9:25 pm for Singapore where they have to take a ferry to an island, hike into the jungle and drink coconut milk to get a clue. They have flights already from Malta to Paris but have to book their own into Singapore. Misti and Jim leave second about 40 minute later.

The cyclists tell the scientists they don’t have to take the Paris flight and can go through Rome instead. That will put them 40 minutes ahead of them. The wrestlers are there next and also ask for the earlier flight. At Changi Airport, the cyclists actually get ahead of the others and the scientists are worried they won’t be there first to u-turn them. They are on the ferry headed to the island where they have to run through the jungle. They see a plane coming in overhead and wonder if it’s the others.

They get off at the island and the cyclists, wrestlers and scientists are all running for it. They have to drink the coconut milk. Kym and Alli get their clue first to head to the flowrider where you do a surfing simulator to win a fast forward. They see the other teams heading out on the ferry and wave at them. Kym and Alli decide to try the fast forward.

The dentists and surfers head to the coconut stand. Adam and Bethany head out and then Jim and Misti. The wrestlers and scientists take over first as they come to the top of a tall hotel where there is an elaborate garden and infinity pool on the roof. They have to cross a high wire from one hotel tower to the other over 600 feet in the air. Brooke decides to do it.

At the #Roadblock, Maya is first out on the high wire. She loves it and says she has no fear of heights. Brooke is waiting for her and Robbie says she has to wait for her to get the clue and come all the way back. Brooke says it’s super wobbly and says she’s going to be embarrassed if she falls and the ice cream maker doesn’t. The scientists are in a solid first. Brooke is nervous about the height but is there.

Adam and Bethany debate doing the fast forward and decide to go for it. Bethany says the waves are petty hard. The cyclists are there and are starting the challenge. They say it could kill their game. Kim and Ally are on the wave boards and they have to hit the two minute mark. Kim goes flying and has to start back over. Brooke is scared but presses on. She says it’s crazy.

She makes it all the way across, gets her clue and heads back with Robbie’s encouragement. Kym and Ally start over at the wave pool when Adam and Bethany show up. They can’t get through the front door and go around the back. They make it there and see the cyclists are up on the boards. Ally is doing well and then Kim splatters and they are out of it. That gives the surfers a shot.

They walk right by the guy that has the clues – maybe they didn’t read the directions… Jim takes the tight rope walk over to get the clue and he has the shakes bad. He starts to fall and then is just dangling 600 feet in the air. The cyclists are worried the surfers are going to kick butt at the surf course. They decide to see if the surfers are any good and if they are, they are going to leave.

Adam takes a tumble and the girls decide to stick around. They reel Jim back in and tell him he has to start over. He starts again but is wobbly again. He is using a lot of upper body weight to get there but makes it across finally. He heads back and is wobbly – he says his arms are shot and Misti encourages him. The scientists decide to get the massage and cupping treatment.

Brooke and Robbie still can’t find the guy and then happy to notice it. They complain that Maya and Amy didn’t tell them to look for a guy walking around. Kym and Ally take another shot at the surfing. Ally loses it and they are out. That gives the surfers another turn. The cyclists decide to wait because they think the board is too small for Adam and that he’s going down again.

He gains his footings and the clock runs. They decide to leave because they think they are going to get it. They are down to 30 seconds. The cyclists dress and argue and Ally blames Kim for them coming there. Adam and Bethany get the fast forward to head to Fullerton Pavilion. That puts them in a solid first. The cyclists head back to the hotel for that challenge.

The girls argue all the way back but then decide they can’t go out like this. Jim and Misti see the board guy right away and get the clue and decide to go make chili crab. Adam and Bethany show up to the check point, take first and win a trip to Bali. They are thrilled and tell Phil they took a huge gamble and pulled it out. Adam says #cowabunga.

The scientists are screaming in agony over the intense and painful massage. Then they start scrubbing them down and the torture continues. One of the women giving the massage says foreigners have a low tolerance for pain. The abuse continues. Amy is actually crying and her back looks really bruised. Maya tells Amy to cry through it.

Brooke and Robbie are there and are also miserable. Brooke complains they are taking off her spray tan. The cupping starts and Maya begins screaming. #FeelTheBurn – how is this relaxing? Jim and Misti show up and find they are the only ones at the #Detour. They start with hot crab – boiling hot – and you can only pull out crab for a few seconds before it starts to burn.

There is a guy with cymbals crashing near them, a flute player, a guy in a giant crab costume and a ton of distractions. The cyclists make it to the hotel. The scientists and wrestlers discuss the double u-turn strategy. They ask if they want to u-turn both the surfers and cyclists. Brooke and Robbie are also in pain from the cupping.

Amy and Maya get the clue and head to the double u-turn at a nearby park. Kim is up on the tight rope and is terrified of heights, but makes it. She gets the clue and heads back to Ally who is encouraging her. The scientists find the u-turn and do the surfers since they have no idea they are already done with the leg. They have to head into the park and look for statues.

Brooke and Robbie finish up with their cupping and head off. Their backs look a mess. Jim and Misti call for more crabs and it’s hot. They have their weight checked and find they are only at one pound and they need two. The cymbals and flutes continue as they pull meat from the seafood. Kim and Ally find the walking clue guy.

The wrestlers show up and decide not to u-turn the cyclists because they think they are too far ahead to bother with it. Jim and Misti get their crab done and head out. The cyclists show up for massage and cupping. The scientists run across the wrestlers and they discuss their u-turn plan. They are surprised to hear they didn’t u-turn them and the scientists tell them to go back and u-turn them but they don’t.

Amy tells Maya they are so dumb for not doing the u-turn like they should have. Jim and Misti also don’t u-turn anyone and they think Adam and Bethany will be done because of the u-turn. The cyclists are crying and in pain, but keep up with the mega-massage. Brooke and Robbie get their next clue to go to the pit stop and that puts them in second.

The scientists’ cab passes them and they ask Brooke if they found the clue box. She lies and says no. Brooke tells their driver not to stop and talk to them. The scientists keep going and the wrestlers are off for the pit stop. He thinks they may end up being last because they lied about finding it. Jim and Misti head to the park while the cyclists finish up their massage.

The wrestlers arrive at the pavilion and Phil confirms they took second place. The scientists are at the Tourism Court and don’t find the clue. Jim and Misti show up for their next clue to take them to the pit stop. The cyclists start the look for the statues while the scientists are still looking. The scientists being to wonder if Brooke and Robbie lied to them.

The cyclists show up in fifth and Phil tells them they are eliminated. The fast forward cost them that leg. They are upset but happy about the experience.