The Amazing Race Recap: Animal Lovers – “I Feel Like I Just Kissed a Goat”: Season 25 Episode 6 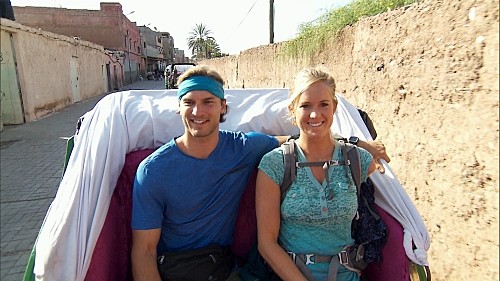 Tonight on CBS the Emmy award winning show The Amazing Race returns for yet another exciting installment in an all new Friday October 31, season 25 episode 6 called, “I Feel Like I Just Kissed a Goat.” On tonight’s episode, the race continues in Morocco, where a Road Block requires a member of each team to walk across a narrow bridge suspended high above the Atlas Mountains.

On the last episode, with a double U-turn looming, emotions ran high when two teams accused each other of playing dirty. Did you watch the last episode? If you missed it, we have a full and detailed recap right here for you.

On Tonight’s episode racers struggle on a frightening Road Block when they’re suspended high above the Atlas Mountains.

#AmazingRace starts now in Morocco in Northern Africa. They will start from a carpet shop. Kym and Alli get to leave first at 815 am. They have to go to a horse drawn carriage stable, take a ride into town and then get into their Ford Fiesta. Next out is Adam and Bethany. They are off and running and Adam says Bethany amazes him. The ladies are trying to find cab that knows where the stables are but are having trouble. The #SoulSurfers find one more quickly.

The #CollegeSweethearts are in third. Shelley and Nici leave fourth. #TheWrestlers leave fifth, #TheDentists sixth. #SweetScientists leave last. Adam and Bethany are at the stables first and he grabs up both their bales of hay and they take off. They deliver the hay, get their apples and are off in their carriage. #TheCyclists are now behind them in second. Several teams don’t realize how far it is and are on foot. Jim and Misti show up next followed by Brooke and Robbie.

Tim and Te Jay finally get a cab but took it too far and missed the hay. Adam and Bethany are done but #MomDaughter run into them looking for the stables. They give them instructions then head to get their Fiesta behind the mosque. The first four teams are all in close proximity to each other picking up their cars. #SweetScientists picked up the wrong hay and have to go looking for the other feed spot. #CollegeSweethearts and #MomDaughter pass them up because they can’t find the correct hay station.

They finally find it but now are way behind. Kym and Alli beat the #SoulSurfers to the pottery shop. The #detour is a choice of setting up an authentic camp or milking a goat then making butter. #TheCyclists decide to go for the goats. #TheDentists and #SoulSurfers show up one after the other. The former chooses the camp and the latter the milking. #MomDaughter are in sixth and are finally to their Ford Fiesta.

A local shows Kym and Alli have to milk and they look for one with full udders. They corner a goat and go for it. Misti and Jim show up to the nomadic camp challenge and begin. Adam and Bethany start looking for a milk filled goat. #SweetScientists and #MomDaughter seem to be lost and are struggling to find the pottery shop. Tim and Te Jay decide to go for the camping. Kym and Alli have enough milk and are now working on making the butter.

Misti and Jim are working on putting up their tent. She holds it up while he tries to make it more stable. Kym and Alli decide to leave the butter challenge because they are told it will take about 45 minutes to make it. #TheCyclists show up to the tent challenge. Brooke and Robbie show up to milk the goats. Robbie is scared of the goat and freaked out by the whole thing. Misti and Jim realize they forgot to put down their rug base and #TheCyclists aren’t tall enough to set up their supports.

Kym and Alli give up on the camp and head back to the goats to start over. Adam and Bethany have their milk and are ready to churn butter. Adam sees #TheCyclists come back and says he’s glad they didn’t change detours. #MomDaughter are way, way behind. Adam sings the local song with the man and then Kym chimes in and it’s getting funny.

Brooke tells Robbie he has to hold the goat better because their milk spilled. #TheDentists take first with their properly made nomadic tent and take off. Tim and Te Jay are working on their tent and work up a solid strategy. #MomDaughter are still roaming around lost. They don’t know what to do.

#TheWrestlers have their milk and start churning as well. Tim and Te Jay fuss at each other at the camp site trying to put theirs together. Adam and Bethany have butter and that puts then in second place. They take off. Misti and Jim hit the #roadblock near the Atlas Mountains.

They have to navigate swinging bridges and zip lines and solve a puzzle midway. Misti is going to do it. It’s really high up and the bridges look intimidating. She walks out a bridge and feels the wind moving the bridge and then the planks disappear and she gets a little scared. She makes it across and then gets on the zip line and is thrilled. Next is a wood puzzle.

#MomDaughter finally get to the pottery place to get the detour info. They choose the butter challenge.  #SweetScientists are rocking the butter challenge. Tim and Te Jay get their clue and move into third. Misti is struggling with the puzzle and finally gets it. She’s told it’s good and gets on a much longer zip line to head back. Jim waits and is happy to see her on the way back. They are given their next clue.

Casbah D’if in Marrakesh is the pit stop for this leg. Adam and Bethany pull up as they leave. Bethany decides to do the zip line challenge. She makes it there but then is struggling to do the puzzle one handed. Kym and Alli turn in their butter and take fourth place. #SweetScientists take fifth and #TheWrestlers sixth and roll out of the butter place.

#MomDaughter show up to the goat place and Robbie is thrilled to see how far behind they are. Bethany pops her shoes off to use her feet to help and finishes her puzzle. Te Jay is there now and works on his puzzle. Alli is hot on his heels and is flying across the bridge. Bethany goes zipping back to Adam and he cheers her on. They are in second heading to the check point.

Brooke is at the puzzles but doesn’t get what she needs to do. #MomDaughter churn their butter, get their clue and head out last. Brooke is struggling when Maya shows up. Brooke can’t make hers align but Maya encourages her and tells her she’s come too far to quit. Adam and Bethany make it to the kasbah and take second place. Adam tells Phil how great Bethany did on the roadblock.

Brooke finally gets it and has hers together but now Maya is struggling. Brooke takes off on her zip line. Kym and Alli take third place and are thrilled and Tim and Te Jay shows up to take fourth. Maya is still working on her puzzle and finally has it and gets approval to zip line out of there. They are in sixth place as they leave. Shelley takes on the roadblock but is going at a very slow pace.

Brooke and Robbie show up for fifth and Phil tells them they are at the halfway point of the race. Amy and Maya show up to take sixth. Maya has a bird on her head and Phil says it looks good on her. Chicken and doves on heads seem to be a thing in Morocco. Shelley does her puzzle and zip lines back. They show up in last place at the kasbah. Phil tells them they are last and are eliminated.

Phil tells them the good news is they are happy with each other and are holding hands. He says they seem connected again. Shelley says they proved they can co-exist and get along and Nici says they had fun. Shelley says it improved her relationship with her daughter.