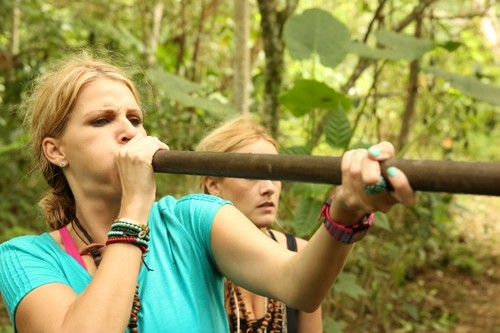 Tonight on CBC their Emmy award winning show THE AMAZING RACE continues with a new episode, “Welcome to the Jungle.”  On tonight’s episode The race continues in Kota Kinabalu, Malaysia, where teams race down rapids in the jungle on homemade rafts.  Did you watch last week’s première episode?  We did and we recapped it right here for you.

On last week’s episode Mark and Mallory continued to struggle with communication and one major mistake jeopardized their chances to keep racing.   In the Road Block, teams had to assemble a toy car and then deliver it to the Guangzhou Children’s Cultural Center in order to receive the next clue.  At the end of the episode Mark and Mallory finally finished the detour and arrived at the pit-stop in tenth place, they were eliminated from the Amazing Race.

On tonight’s episode teams race through the Malaysian jungle where the roaring rapids crush their spirits and their homemade rafts. In the detour, teams must choose a Murut hunting guide who will lead them into the jungle where they must hit a target using a blow pipe before receiving the next clue.

The 1st flight of racers land in Malaysian Borneo, and the all race out of the airport to jump in taxis and head to Kionsom Waterfall. Once the reach the Waterfall, there is a Roadblock and one member of each team must propel down the waterfalls with gnomes strapped to their backs, and find their next clue hidden in the rocks. Dave and Connor are currently in first place, they get the clue from their Roadblock and head to the next destination. Jet and Cord experience a setback when Cord forgets to grab the clue and has to go back to the top of the falls and propel down again. The second flight of Amazing Racers is finally landing in Malaysian Borneo.

Dave and Connor are currently in first place and have arrived at the river for a detour. They must build a raft and travel down the river and either deliver supplies to a village, or stop in the jungle and successfully shoot a target with a blowgun. Leo and Jamal arrive in second place and began building their river raft, closely followed by Margie and Luke in third place. Jet and Cord arrive at the river in fourth place and begin building their raft. So far, all of the teams have chosen to deliver supplies instead of using the blowguns.

Leo and Jamal arrive at the village to deliver supplied in first place, Dave and Connor were in first place but they missed the village and paddled right down the river past it. Jet and Cord are currently in second place now. On the way back down the river Leo and Jamal experience some difficulties and their raft falls apart. Dave and Connor finally find the chief and deliver the food.

Jennifer and Caroline have decided to go the blowgun detour in the jungle. Along with the Harlem Globetrotters team.

Once the teams get to the end of the river they receive a clue leading them to the next pitstop, a floating water village. The racers that arrived on the second flight are just getting to the waterfalls to propel down and get their first clue.

Dave and Connor arrive at the pit stop at the water village in first place, they have won this leg of the race. Jet and Cord arrive in 2nd place, and Leo and Jamal finish in 3rd place.

Jessica and John and Rachel and Brendon are finally arriving at the river and building their rafts. Meanwhile Margie and Luke arrive at the pitstop in 4th place. Flight Time and Big Easy finish the race in 5th place and Caroline and Jenn arrive in 6th place. Brendon and Rachel are currently stuck in the river, their raft has fallen apart.

Joey and Meghan are officially eliminated from the Amazing Race.