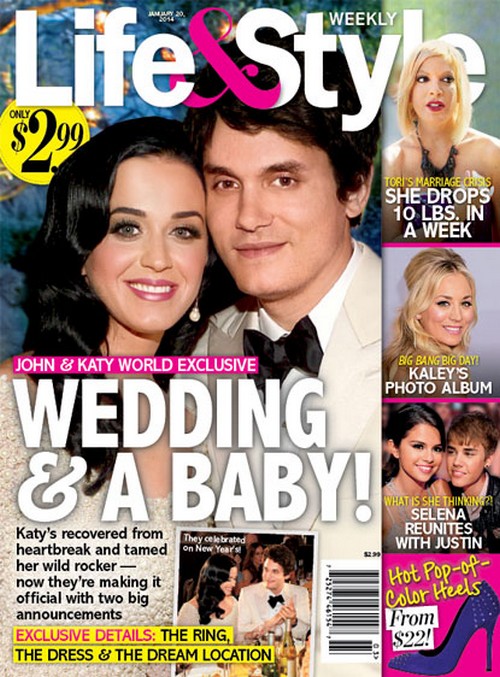 The latest cover issue of Life & Style Magazine has an interesting new story about Tori Spelling, and her ‘marriage crisis’. They claim that in the wake of the Dean McDermott cheating allegations, Tori has dropped 10 pounds in one week dealing with the stress. She’s reportedly kicked Dean out of the house, but she has yet to file for divorce or even officially separate for him. She was spotted adopting a dog a couple of days ago, but the dog’s not going to help in the long run. The real question now is – will Tori have the wherewithal to divorce Dean and take advantage of the publicity? Or will she meekly take him back and continue to turn a blind eye to his cheating?

Regardless of her choice, she should make a decision before she wastes away completely. She’s not particularly curvy to begin with, and she’ll soon start resembling a starving person if she doesn’t do something about it.

Life & Style also has a big feature this week on John Mayer and Katy Perry, and their surprise wedding. Apparently, John and Katy are planning a Hawaiian getaway vacation for their close family and friends, leaving some people to wonder if they’re planning a surprise wedding. A source tells Life & Style, “John says all the time that Katy is going to be his wife. He says she just gets him like no one else does.”

Obviously, Life & Style also has a feature on Justin Bieber‘s reunion with Selena Gomez, which has dominated the gossip airwaves for the past week. Will they stay together? It’s very unlikely, so we’ll be here for the breakup when it eventually happens.