WWE Slam City New Episode Unveiled: Between A Rock And A Pizza! (VIDEO) 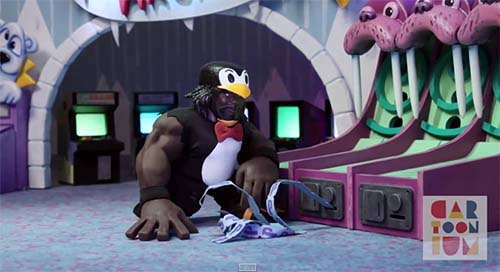 The newest WWE Slam City episode has been unveiled and it features animated versions of The Rock and Mark Henry battling over a delicious prize: A pizza! You’re definitely going to want to check out this latest installment in WWE’s new kids property, comprised of this original animated short-form series, as well as a complete line of WWE Slam City merchandise!

The animated shorts take place in the fictional Slam City, where a new player named The Finisher has “finished” all your favorite WWE heroes and forced them to get day jobs. Gasp! The episodes take a fun look at the antics these heroes get involved with and are sure to keep you entertained — whether you’re a kid or just a hardcore WWE fan!

So, before you let your day drag on and on, consider taking a look at this newest episode. There are two parts to the video, so don’t forget to check out both installments!