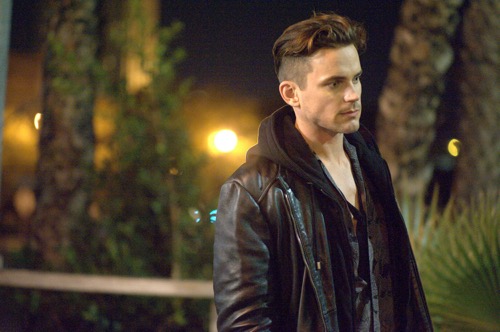 Tonight on FX our favorite creepy drama American Horror Story: Hotel airs with an all new Wednesday October 21, season 5 episode 3 called “Mommy,” and we have your weekly recap below. On tonight’s episode Alex (Chloë Sevigny) hits a breaking point when Scarlett (Shree Crooks) brings up memories.

On the last episode a fashion designer named Will Drake spruced up the Hotel Cortez; a model got the attention of the Countess; and John learned about the hotel’s first owner. Did you watch the episode? If you missed it we have a full and detailed recap right here for you.

On tonight’s episode as per the FX synopsis, “Alex hits a breaking point when Scarlett brings up memories of Holden and Donovan becomes a target of the Countess’s rival.”

Tonight’s episode of American Horror Story Hotel kicks off with Tristan Duffy walking around one of the hotel rooms – he is calling out for Patrick March. He tells him that he is a huge fan, and he knows he is one of the best serial killers to ever walk the earth. March appears – he is happy that Duffy has “found his calling” and he can’t wait to tell him all about the hotel, and how he uses the secret passages in his “murder palace.” March wants Duffy to put them to good use.

Will Drake and Claudia are taking a tour and planning the remodeling, they stumble upon Duffy in March’s room and demand to know what he is doing there. Duffy laughs that he was just visiting a friend. Will Drake is shocked that the cut on Duffy’s face has healed already. He tells Duffy to get out of his hotel and not to return – or else he is going to call the cops on him.

Meanwhile, John’s wife Alex is paying her patient with the measles a visit – his fever has spiked to over 103 degrees and he has phneumonia. Alex is furious with the boy’s mother because she didn’t call for help sooner. As the boy is rushed to the hospital, Alex watches the doctors work on him from a distance – she realizes that she makes it a mission to save other people’s kids because she couldn’t save her own son Holden. Afterwards she pays her therapist a visit for family therapy with John and Scarlett. Alex reveals that she has never gotten over losing him, and at one point she actually tried to slit her wrists and commit suicide because she thought that she couldn’t live without Holden. But, she gets up every day and carries on for Scarlett.

Alex confesses that she is mad at Scarlett for saying that Holden is alive – she thins Scarlett is trying to hurt her and toying with her emotions. Scarlett insists that she didn’t make it up and tells her parents and the therapist all about the room with a Nintendo in it and an empty swimming pool where she found Holden. She says that his feelings aren’t the same as they used to be and now Holden acts different.

Back at the hotel, Claudia gets ready for bed in her room. While she is laying in the bed, Gabriel (the junkie) climbs out of her mattress and chokes her and kills her with a knife. Meanwhile, John and his partner arrive at an office where there were more murders – it was the hub on a gossip website, and all of the employees tongues were nailed to the desks. He realizes it is another commandment murder. After they are done at the crime scene John heads back to the hotel – and he bumps in to Gabriel in the lobby, he is covered in Claudia’s blood. He cries for John to help him before he collapses on the floor.

Up in Will Drake’s hotel room – he is going over blueprints for the renovations he plans to do to the hotel. Duffy sneaks up on Drake and quizzes him about the renovations that he is planning. Then he seduces him, while he is kissing Drake he takes out a knife and prepares to slit his throat – but the Countess stops him and shakes her head at Duffy.

At the emergency room, the nurses are rushing Gabriel to a room – and he is having a seizure. John is trying to ask him about the blood, Gabriel swears he never meant to hurt her, he doesn’t say who the victim was. Right before Gabriel dies, he tells John that Sally “made him like that.” John heads back to the hotel to find Sally, he tries to arrest her and cuffs her and puts her in the elevator. The lights start flickering and Sally begins to seduce John in the elevator. Suddenly the lights come back on, and John wakes up – Sally is gone. He stumbles out of the elevator, confused.

Donovan returns to the hotel, his mom Iris has found new hotels for them to live at online. Donovan scoffs that he will never live with her again, all she has done is ruin his life from day one. Donovan sneers that he overdosed on purpose to get her away from her, and he still got stuck with her. He tells him mom that she should just kill herself – and then he storms out of the hotel and goes on a bender. HE stumbles across a woman who seems to have car trouble, he is about to stab her in the next – but she spins around knocks him out and throws him in the truck of her car.

Alex shows up at the hotel, and she and John have drinks in the lobby. Alex surprises John with divorce papers and tells him not to come home – he doesn’t take it well and he bursts in to tears. He sobs and begs Alex not to leave him, he says that he is going crazy and he has been seeing things. Alex is worried, and takes him up to his hotel room. Alex gives John a sleeping pill and puts him to bed – he apologizes for losing Holden, and says that he still loves her. They start kissing and then John says they should have another baby – Alex freaks out and jumps out of bed and tells him to sign the divorce papers and if he has any questions, he can call the lawyer.

Meanwhile, the Countess is seducing Will Drake – even though he is obviously in to guys. Duffy walks in and freaks out. The Countess tells Will Drake that they are going to have to take a rain check. She takes Duffy aide and reveals to him that she is actually broke, she lost all of her money. And, she plans on seducing Will Drake, Marrying him, and then killing him and taking all of his money.

Alex storms out of John’s room and gets lost in the mazes of hallways. She bumps in to dead Claudia, who now resembles a very stylish zombie, and turns and walks the other way. Then – she sees Holden. He looks up at her and says “hi mommy,” and Alex is in shock.

Iris has enlisted the help of Sally to commit suicide – she wants her to give her a lethal injection. Iris says that her own son doesn’t love her, she feels like a joke. Iris is tired of being the joke in life. Sally says that she is thrilled to kill Iris and get rid of her for once and for all – but she wants to make sure that Iris doesn’t have any unfinished business. She scoffs, “in other words don’t haunt my hallways bitch.” Iris reassures Sally that she has no intention of sticking around.

Donovan wakes up and the woman that kidnapped him has him tied to a chair – she reveals that her name is Ramona Royale. Romano was a famous actress in the 1970’s – until she met the Countess. She fell in love with her, and Ramona and the Countess were together for almost 20 years. Until Romano met a rapper named Mo, she wanted to be with Mo forever, and she turned him. When the Countess found out, she killed Mo. Now, Ramona wants revenge – she wants to kill the babies that the Countess has hidden in the basement of the hotel, and she needs Donovan’s help. Donovan scoffs that he won’t be of much use to Ramona – the Countess dumped him.

Donovan heads back to the hotel, and Liz Taylor fixes him a drink at the bar. Meanwhile upstairs, Iris isn’t dying fast enough after the injection – so Sally puts a plastic bag over her head to suffocate her and then sits down to smoke a cigarette. She watches patiently as Iris gasps for air – then Donovan comes knocking on the door. Donovan storms in and sees that his mom is almost dead – he slices his wrist and lets his blood drip in to her mouth, Iris slowly starts to come to.