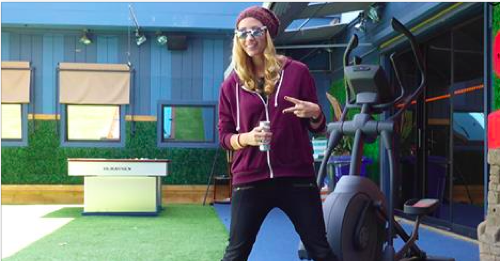 Tonight on CBS Big Brother 17 airs with an all new Wednesday September 2, season 17 episode 31 called “Episode 31”, we’ve got your recap down below! On tonight’s episode the Power of Veto competition is held.

On tonight’s BB17 as per the CBS synopsis “during the veto meeting, the power of veto competition winner can save someone from eviction. We will see the final nominations by the end of the evening”

Vanessa decided to nominate Meg and James because it gets the least blood on her hands and because she doesn’t think she can trust them. Meg is so upset about this. James says it sucks being on the block and he hopes one of them can get the veto and go after some revenge. Vanessa says if James wants to talk she’s happy to explain.

James says she’s good. Vanessa then starts her crying crap and says it’s awkward. James comes to see Meg and asks if she’s okay. James tells Meg that Vanessa told him there was no particular target but Meg thinks it’s her and she’s upset about the whole thing. She says one of them is going home for sure. He says maybe they need to talk to Vanessa and she says it’s funny that they kept her.

Vanessa says she doesn’t feel good about it. James hugs Meg. Meg tells James that he has to win POV. He says it’s the most important POV comp ever. Vanessa talks to Steve and he says Meg is still in there and they haven’t talked to him. Vanessa asks what’s the best move if James wins POV. She asks Steve what’s her best move to win the game. She says it’s him, John or Austin.

She says she can’t put Austin up and it would be a dumb move. She says she’s played a pivotal role in every eviction. She says she has so much blood on her hands. He asks if she trust Austin will take them to five. She says she hopes James doesn’t win the veto. They are called to pick players for the veto competition. Vanessa draws Julia. James draws Liz. Meg draws Austin. That’s the worst draw for them.

Vanessa is thrilled since that means there are four people playing against Meg and James in the veto comp. James says he thinks Liz and Austin will both try and win it so they can’t get back doored and they won’t want James to win it. They wonder what kind of comp it will be – physical or mental. James jokes about coming out dressed like Audrey.

Meg asks James about how he found out he was going to be a dad. He says one night he had too much fun and then he saw he had 20 missed calls and texts from Brianna at 4 am. He says he ignored it then called her later and she told him to come to the hospital and meet her daughter. He says once they saw the baby was Asian, they knew it was his.

James says it was a blessing in disguise and he loves her. He says it was like whoa. John calls everyone for the veto comp. It’s a game show set and John is the host for the #Veto. Steve is co-hosting. They each have to hide a veto card then they have to go in and search for hidden veto cards. The one who has the best hidden veto card will win it.

Vanessa goes inside and looks in the freezer and finds Julia’s. John congratulates her. Austin heads back inside with no luck. Julia has no luck. James makes more mess finds nothing. Liz searches drawers and cushions and finds Vanessa’s. Liz is freaking out because the house is wrecked and she has OCD. She is so upset about the mess. She runs out of time.

Meg goes into the hammock room and goes back inside and finds Liz’s. Austin, Meg and James vetoes are still hidden. Vanessa is looking around and she runs out of time. Austin is overturning furniture then runs out of time. James decides to cover up where his is hidden some more. Looks like James found Meg’s. Looks like it’s Meg’s. That leaves Austin and James.

James is so close to Austin’s and doesn’t get it. Vanessa was also close to it and misses Austin’s. It looks likes she got James’ veto. Vanessa found Liz’s card first. Julia found Vanessa’s. Meg found Julia’s. James found Meg’s. Then Vanessa found Austin’s. That means James won the POV!

Meg is upset and knows it’s very likely she’s going home. Vanessa is very upset and has to find a replacement nominee and has no idea what to do. The house is a wreck. They head back inside. Liz is upset and asks James if he dumped all the cereal. He denies it. They look around at the carnage. He says the POV is for Bailey, his daughter. Vanessa goes up to her HOH room. She’s upset and pacing.

She knows James is gunning for her now and if he wins HOH, she’s going up on the block. Meg comes to talk to James and she asks if he feels good. He says it feels like karma because they didn’t deserve to be up there. They wonder who she will put up. She hopes Vanessa finds a new target that’s a bigger threat. He says he’s going to try and make a deal with Vanessa.

He says he will tell her he’s not going to be nice. Liz comes to see Vanessa and says if she wants to send Meg home, they’ll do that and tells her if she’ll put up John or Steve. Vanessa says she doesn’t know. Vanessa asks how can she know they won’t vote John if she puts him up. She says the vote will flip. She says this is the worst result.

James decides to wear his medal around and let it soak in that he’s safe. Meg asks if he’s wearing it all day and he says damned right. He says Vanessa better watch her back. Then James tells Austin that he’s going after Vanessa. He says she put him up twice and went after he and Meg for no reason. Austin says he didn’t play them and says he was just protecting Meg.

Austin goes to see Vanessa and says he thought he had the veto. He says James is definitely coming for her. Vanessa says she’s completely f-d because she has to get rid of Meg. She says she won’t keep Meg now. She says it’s so irritating. Austin says to make lemonade and find the best possible scenario. Julia comes to see Vanessa who says she’s f-d all the way around since James won.

Julia tells her to put Johnny Mac up. Vanessa says they won’t let up on her putting John up but she has a side deal with John and she can’t let them know that. Vanessa says Meg is going to float until the end. She’s upset because Meg is her target and they’re not hearing her. She says they will never get her out. Austin says to put up John and they’ll just play a really good social game with the others.

James goes to talk to Vanessa about Meg. He says he just wants to hash things out and she says she’s in a bad mood. He asks where they stand. Vanessa says they could have worked together and her options are limited. She says she didn’t have anything personal until someone came and said that she’s his target. James says she remembers every little piece and plays so hard.

Vanessa asks if he’s insulting her and says he needs to go. She says he’s saying she’s playing too hard and he says he’s complimenting her. She says it’s a criticism. Vanessa says there is nothing personal. She says he’s safe and she’s incentivized to send Meg home. James calls everyone for the veto meeting. John is worried that he might be a replacement nominee.

James says he’s going to use the veto on himself even though he thinks she’s an awesome girl. He tells Vanessa she now has to make a replacement nomination. Vanessa congratulates James and says job well done. She says this is difficult since there are so few other options and has to make the best game move. She says she has to put Julia up there. James adjourns the meeting.

Vanessa says Meg has to go and she hopes putting Julia up will seal that fate. Julia is nervous next to Meg since she’s never gone home. James says if he could pull the right strings they could break up the three way alliance.