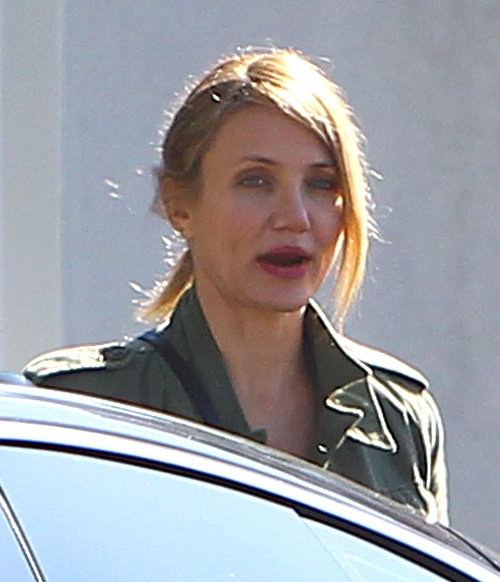 Cameron Diaz and Benji Madden had a surprise shotgun wedding that took the media completely by surprise. Sure, there were rumors that Cameron Diaz and Benji Madden were planning to elope, but nobody expected that they would do it so suddenly. I mean, Cameron’s track record with boyfriends has been notoriously spotty, and if anything, there were rumors that Cameron and Benji were about to break up – not get married!

Then again, sources close to the couple have been suggesting that it wasn’t just spontaneity that led to the shotgun wedding, but rather, more pressing concerns. These sources claim that Cameron Diaz is pregnant, and that was one of the biggest reasons that she and Benji decided to get married immediately. These same rumors are further supported by the fact that Cameron has been avoiding alcohol at quite a few awards season functions that she’s attended, and trust me – Cameron Diaz not drinking alcohol at a party is like seeing the Dalai Lama start eating meat for no reason.

Now, Cameron Diaz is 42 years old and for women in Hollywood, landing good roles is already akin to chasing a unicorn. For women over 40, it’s unfortunately like trying to chase a unicorn and also catch it. For pregnant women over 40 – well, you get the picture. Now, if Cameron Diaz is pregnant, there’s only so long she’ll be able to hide the pregnancy.

However, she could be trying to keep it hidden right now because she’s in talks for some pretty big roles, and if news gets out that she’s pregnant, she might lose her momentum for those roles. I mean, Hollywood is still a fairly sexist place, and producers and executives will turn away from Cameron if they find out that she’s pregnant. Even barring logistical difficulties of shooting pregnant women in non-pregnant women roles, they’ll assume that Cameron is not up to par or something equally as biased.