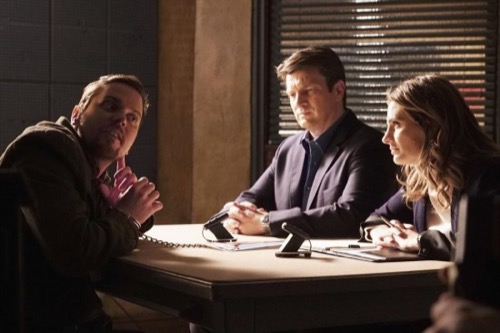 Tonight on ABC Castle starring Nathan Fillion continues with an all new Monday February 9, season 7 episode 14 called “Resurrection,” and we have your weekly recap below. On tonight’s episode, part 1 of 2, Castle [Nathan Fillion] and Beckett [Stana Katic] encounter an old rival, Dr. Kelly Nieman, while looking at clues in a woman’s mysterious murder. As they investigate the case further, links emerge between the crime and an infamous serial killer.

On the last episode, Castle was hired to uncover if a client’s husband was having an affair, but the case took a shocking turn when Castle witnessed the client’s murder – by her husband. But with no proof that the killing took place. Did you watch the last episode? If you missed it, we have a full and detailed recap right here for you.

On tonight’s episode as per ABC’s synopsis, “when clues in a murder implicate Castle and Beckett’s nemesis, Dr. Kelly Nieman (guest star Annie Wersching), Castle is called in to consult on the case. But as the team delves deeper into the investigation, they uncover connections to notorious serial killer Jerry Tyson.”

Tonight’s episode of Castle kicks off with a woman franticly running down a dark alley – she stops when a man steps out in front of her and blocks the way.

At Castle’s house his daughter and mother are bustling off, Castle is shocked when his daughter kissed Beckett good-bye. They discuss whether there will ever be a right time for them to have kids of their own, and then Kate receives a call from work.

Kate heads to the alley with Espo where the woman is lying dead on a stretcher, she appears to have been strangled and she has abrasions on her feet. Kate says that she must have ran from her attacker first – and she is wearing a red nightgown so she couldn’t have come from far. They run her fingerprints and learn that her name is Susan Watts and she is from Vestal, New York – she also has an arrest record a mile long.

Beckett heads to Susan’s apartment and meets her old roommate Katrina, she says that Susan moved out three months ago and she barely knew her. Katrina says that Susan was the “dream roommate” but she moved out because she got a good job and could afford a nicer place, she seemed like she had really turned her life around. Katrina has no idea where she worked – she was secretive about it.

Ryan tries to find where Susan was working – but she was apparently paid in cash. They do find an old job placement service called New Horizons where she was working when she first got out of prison. Espo heads to the morgue and Lanie fills him in on a feather she found in Susan’s hair. Lanie says that Susan reminds him of “Pam Hodges,” the hooker that was paid thousands of dollars to look like Lanie and then was killed. She thinks Susan might be the same deal – she was a struggling addict fresh out of prison, and all of a sudden she lands an amazing job that pays in cash. Pam was strangled with wire though. Lanie is certain that Susan and Pam’s deaths were connected, even though Pam’s killer is in prison. Lanie calls Sam and tells her what she thinks – and reveals that Susan had plastic surgery and it looks like the work of Kelly Neeman, the same plastic surgeon that worked on Pam Hodges.

Kate sits down with the captain and fills her in on their suspicions about Kelly Neeman, she gets her permission to bring Castle in on the case since he is so familiar with it. Kate heads to St. Simon hospital where Kelly Neeman is now working at a cosmetic surgery firm. Dr. Neeman isn’t thrilled to see her and tells her that she hurt her reputation as a surgeon after the last murder investigation. She insists that she doesn’t know Susan Watts, and Kate says that she will be back with a search warrant for her patient records.

Espo gets a security video footage form the Neeman’s office, they are shocked to see Susan Watts leaving her office. The only problem is that the video was filmed after they found Susan Watts dead – which means that Dr. Neeman fixed someone’s face to make them look like Susan’s doppelganger. They watch the woman climb into a car in the parking lot and get a glimpse of the driver, it’s the infamous serial killer 3XK also known as Jerry Tyson – he is supposed to be dead.

Castle briefs the team on the case of Jerry Tyson, and how he kills his victims in groups of three. The last time they seen him, Castle shot him and he fell off the bridge in to the river. He was thought to be dead, but clearly survived the shooting. They are certain that the woman in the security footage with Susan Watts’s face will be Jerry’s next victim.

They bring Neeman in for questioning, she insists that she can’t share her patient’s name because of client confidentiality. Kate warns her that if she doesn’t give up a name her firm will be raided by officers. Neeman caves and says that the woman’s name is Amy Barrett, and it is just a coincidence that she looks like Susan Watts. They run Amy’s name and can’t find information on her or an address. But, they run the plates on the car that Tyson was driving, it is licensed to a man named Michael Boudreau. They head to the address and find Jerry Tyson trying to escape out of a window – Kate arrests him. They search the apartment and find Amy Barrett’s cell phone – but there is no other trace of her.

Castle and Kate prepare to go question Jerry, they realize that they can’t charge him with any of the murders from the past because someone stole all of their case files and evidence against him. They can charge him for kidnapping and aggravated assault for when he attacked Castle in the motel room. Castle and Kate question Tyson – he insists that he is Michael Boudreau and Amy Watts is his girlfriend. He says that he met a plastic surgeon named Kelly Neeman and she “did some work on his face.” They run the fingerprints, and according to the system he is Michael Boudreau, not Jerry Tyson. They don’t have a DNA sample from Jerry Tyson – so they can’t test his DNA. Castle and Kate are certain that the man they are talking to is Jerry Tyson, but the Captain tells them that if they can’t prove it, they have to cut him loose.

They decide that they need to find the real Michael Boudreau, and that will prove that the man they have in custody is Jerry Tyson. Kate runs Michael Boudreau’s credit card and tracks it to a café. She arrives and Michael Boudreau isn’t there, it’s Amy Barrett. Amy refuses to talk to Kate, and she warns Amy that Michael is a fraud and her boyfriend is a serial killer. Castle and Kate head to Jerry Tyson’s childhood home to try and find something to test his DNA with – they find a baby tooth that he lost when he was a child.

Beckett heads back to the police station and Neeman is sitting there in the waiting room, she says that she is waiting for Michael Boudreau and he is her patient. Kate receives a phone call from Amy Barrett, she is freaking out because she saw a picture of Susan Watts on the news and she looked just like her. Amy says that she saw Susan in Mike’s truck three days ago. Kate tells Amy not to move – and says that she will be right there.

Castle finds an old mugshot of the woman that raised Jerry Tyson – she is a dead ringer for Susan Watts and Amy Barrett. Castle shows him the mug shots, and he still insists that he is Michael Boudreau. The DNA test comes in, and it doesn’t match Jerry’s DNA so they have no choice but to let him leave with Neeman.

Meanwhile, outside Kate can’t find Amy Barrett. While she is standing on the street corner looking for her, someone stabs her with a needle and injects her with something that knocks her out – she is wheeled away in a wheel chair.
TO Be Continued..