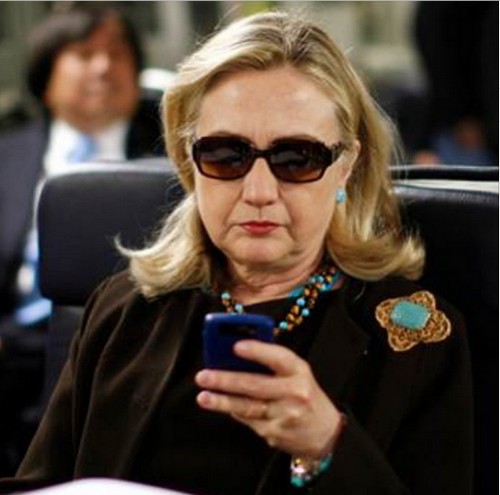 We reported earlier that on Sunday, April 12, Hillary Clinton announced her presidential run for the 2016 USA Presidential campaign. She posted a video announcing her desire to run for the President of the United States of America, and that her main goal was to bring economic equality to the country.

Within a few hours, the former secretary of state has set the blogosphere and world of social media ablaze. Check out some of our favorite A-listers reacting to Clinton’s announcement

American Idol alum Clay Aiken responded to Clinton’s video announcement by saying “I love you. But Why are you the stiffest and most scripted looking person in this video? #loosenup.”

.@HillaryClinton, I love you. But why are you the stiffest and most scripted looking person in this video? #loosenup http://t.co/7I4NsojHLn

Fans responding asking if he had a problem with Hillary running, he then released this statement via Twitter. “Let me be clear! I LOVE @HillaryClinton. I am so excite she is running. But the GOP has some CRAZY candidates who come across as folksy (though insane) and I want her to beat them on EVERY front.”

Singer/songwriter Carole King showed her support for Hillary with a short “I’m in.”

Lena Dunham tweeted this photo and said “This is Hillary reading a text from me that says ‘with you every step of the way, gurl’ #mypresident.”

Even athlete Earvin Magic Johnson had something to say. He tweeted “@HillaryClinton will fight for the poor, middle class and embrace young people!”

.@HillaryClinton will fight for the poor, middle class and embrace young people!

Surprisingly, young superstar Ariana Grande weighed in as well, tweeting out at simple “yaaas @hillaryclinton,” in support of the decision to run for President.

All of this in just one day? It sure does look like Hillary Clinton has some friends in high places. Are you team Hillary? Let us know in the comments below!