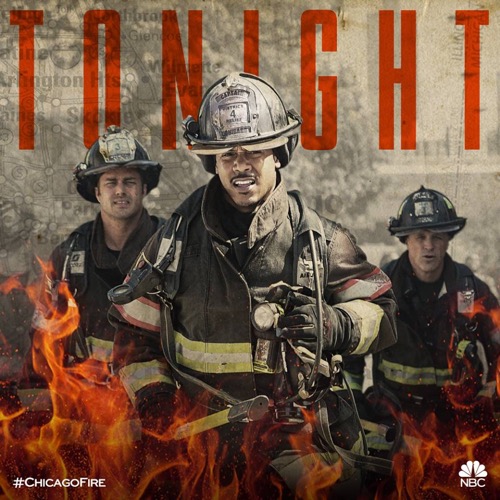 Tonight on NBC Chicago Fire returns with an all new Tuesday, November 10, season 4 episode 5 called, “Regarding This Wedding” and we have your weekly recap below. On tonight’s episode, Boden (Eamonn Walker ) offers to host a wedding at the firehouse after a fire destroys the original location.

On the last episode, the squad members came together to support one of their own; Herrmann tried to figure out how to reopen Molly’s after it got shut down; and Severide dug deep into the arson investigation. Did you watch the episode? If you missed it we have a full and detailed recap, right here for you.

On tonight’s episode as per the NBC synopsis, “Boden offers to host a wedding at the firehouse after a fire destroys the original location, but it doesn’t sit well with Chief Riddle, who also butts heads with Dawson over her ability to perform. In other events, Severide fights for his old position; and Capt. Patterson finds himself torn between leadership and his colleagues.”

Tonight’s season 4 episode 5 looks like it is going to be great and you won’t want to miss it, so be sure to tune in for our live coverage of NBC’s Chicago Fire.

It seems the rumors are true. Chief Ray Riddle was vying for the upcoming position as Fire Commissioner and apparently he considers Firehouse 51 to be the only blight on his career that could prevent him from getting the job he really wants.

Therefore Riddle never really cared to intervene in their district until they provided him the perfect opportunity to make it look like he could be a tough commissioner in the future. Which is how the firehouse got into trouble because of their high turnover rate. And why Severide was ultimately demoted.

But unfortunately Riddle also doesn’t shy away from stirring things up in order to create a problem he could then fix. So that’s how Dawson landed in his crosshairs.

Dawson had been given time to come back to work and once she passed her physical that’s all she wanted to go. Return to truck duty. However Riddle felt she wasn’t ready and demanded that she met him for a meeting. Where he then took the time to suss out whether or not she was impregnated by her lieutenant and if he could use her miscarriage as a way to provoke her into proving that she was unfit for duty.

So Riddle didn’t want Dawson and the rumors circulating about Dawson to be attached to any firehouse under his care. Yet Dawson was smart enough to see his trap for what it was. And was able to express her dissatisfaction without crossing a line that could possibly get her fired.

Though, back at the firehouse, no one had approved of the way Riddle had gone after one of their own. Especially Chief Boden who at first tried to stay under the radar when it came to his superior but afterwards felt like maybe Riddle shouldn’t be his first concern anymore. So Boden agreed to do something that he knew Riddle wouldn’t approve of. He told Dawson and Brett that they could throw a wedding at the firehouse for a couple whose first wedding was destroyed by a fire.

And it was just funny that Patterson was against the idea. Not that long ago Patterson had been singing Boden’s praises for the way his house came together as an actual family. But push come to shove and Patterson wasn’t onboard with throwing a wedding because he didn’t want to hurt his own political aspirations of perhaps rising through the ranks one day.

Thus he warned Boden about throwing a wedding and he wasn’t afraid to tell Riddle himself that he wasn’t on board with his own chief.

However things changed after Severide passed his leadership class. Severide had been told beforehand that if he kept his head down and completed his course that his demotion would become a thing of the past. And so Severide would looking forward to regaining his proper title but Riddle came down to the station and saw the wedding preparations going ahead.

So he asked Severide that if he was promoted back to his former rank would he still think it was appropriate to throw a wedding at the firehouse. And Severide said “yes, he would”. Because no matter what Severide wasn’t the type of man to go against his Chief’s decision just to score points. Yet Patterson was brought into the meeting and he made Riddle aware of his feelings.

He said he didn’t think the firehouse was the place for a wedding. And when Riddle decided to overlook everything Severide did in order to keep him as a lower rank, Severide got angry but Patterson apologized for him. He said he didn’t support Severide’s lack of respect and Riddle thanked the other man’s loyalty by implying there was a position of Chief opening up soon.

Although, for all their blathering, the wedding between Becca and Davis went down without a hitch and a news van had even showed up to cover the event. So the wedding ended up making the firefighters look good. And when the time came to take credit, it was Patterson that insinuated himself right in front of the cameras.

In fact he made it look the wedding was all his idea and that didn’t win him any favors later at Molly’s. All the guys had apparently watched the interview and they had come to agree with Severide’s original assessment of the man. So if the firehouse was only big enough for one of them then the guys were going to choose Severide over Patterson.

And that went for Chief Boden as well. Earlier the guys had been remembering a former firefighter Bobby Dunbar and it seems that Bobby was one of the good ones. So the Chief told Patterson that he feels bad for the future of the fire department if it was the politicians that were moving up while Bobby Dunbar’s kind was dying out.

But there were two people that missed Patterson’s interview. Chili finally gave Jimmy the go ahead on tonight’s episode of “Chicago Fire” and the two were making outside when everyone else had been celebrating Becca and Frank’s nuptials in Molly’s.