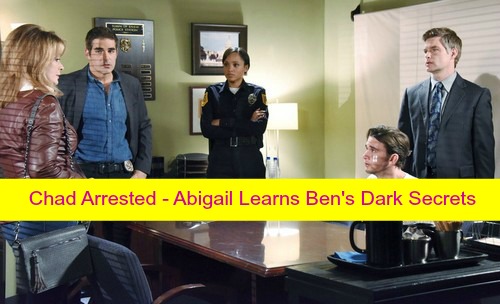 “Days of Our Lives” (DOOL) spoilers tease that Chad (Billy Flynn) will come out of his coma and find himself in a world of trouble. Chad took quite a beating from Ben (Robert Scott Wilson) and his brain is still on the mend. That means Chad will have a case of amnesia when he wakes up.

DOOL has to throw one of those in every couple of years. It’s probably a soap law. It sounds like Chad won’t remember his suspicions about Ben or even that Will (Guy Wilson) is dead. All Chad will know is that he couldn’t possibly be a coldhearted killer.

Daniel (Shawn Christian) will believe Chad needs to take some time to heal in the hospital, but Justin (Wally Kurth) will refuse to let Chad stay one second longer. Rafe (Galen Gering) will side with Dr. Dan on keeping Chad under observation, but this is out of his hands now.

Justin won’t want to risk letting Chad slip through his fingers. After all, “Days” viewers know that Stefano (Joseph Mascolo) is pretty slick. With a wave of his hand, Stefano could pay off an employee or two and sneak Chad out through a backdoor. Justin just isn’t willing to take that chance.

Once Chad is in the slammer, he could start to feel like he’s alone in this fight. Fortunately, one Salemite will emerge to show her support. “Days of Our Lives” spoilers say Marlena (Deidre Hall) will grill Chad and realize he has even fewer memories of his actions than before. Nevertheless, Marlena will sense that Chad is being honest with her. Chad may not have the best reputation because of his association with the DiMeras, but Marlena knows he’s not like his ruthless family.

Deep down, Marlena doesn’t think Chad would kill Will or anyone else for that matter. Abigail (Kate Mansi) doesn’t believe Chad’s the guilty party either. However, Abigail will still find herself struggling with some doubts. When it comes down to it, Abigail can’t stand up for Chad’s innocence without calling her fiancé a liar. We can’t forget that Ben claims Chad came into his apartment on a deadly mission.

It appears Abigail will try to stay on the fence as long as she can. DOOL rumors hint that Abigail could be forced out of the neutral zone soon enough. Abigail may find that good ol’ Benny is hiding a few dark secrets. Stick with “Days of Our Lives” to see if Abigail will face danger as the mystery unravels.

So “Days” fans, what do you think about the news that Chad will awaken and be thrown in jail? Will Marlena be able to help Chad prove his innocence? How will the cops get updates on the real killer? Will Ben make a crucial mistake? Let us know what you think in the comments below and don’t forget to check CDL often for the latest “Days of Our Lives” spoilers, rumors, updates and news.

Days of Our Lives Weekly Promo Video for October 26-30