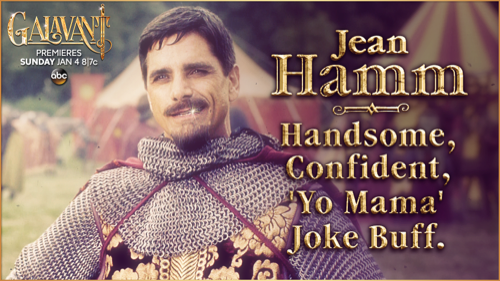 Tonight on ABC, Galavant premieres with an all new Sunday January 4, season 1 premiere called “Joust Friends,” and we have your premiere episode recap below. On tonight’s episode, the premiere of this musical comedy is about a medieval hero named Galavant [Joshua Sasse] who’s fallen on hard times after losing the love of his life.

For those of you who don’t know show, the series will follow the adventures of Galavant, a dashing hero who is determined to reclaim his reputation and his “Happily Ever After” by going after the evil King Richard, who ruined it the moment he stole the love of Galavant’s life, Madalena. The episodes will chronicle Galavant’s journeys (and the twists and turns that go along with them) through musical numbers composed and written by Menken and Slater.

On tonight’s episode as per the Bravo synopsis, “in the premiere of this musical comedy about a medieval hero named Galavant who’s fallen on hard times after losing the love of his life, Madalena, to the evil King Richard, a princess offers him a chance at redemption and to win her back, but first he’s got to give up the booze and get himself back in fighting shape.”

Tonight is going to be a great premiere of Galavant for sure and you’re not going to want to miss a minute. Tune in at 8Pm EST on ABC and we’ll be recapping it live right here for you but in the meantime, hit up the comments and let us know your thoughts on the new series!

On tonight’s premiere episode of the ABC musical, “Galavant” opens up to an unusual song dance about a young prince named Galavant. Like the usual Prince Charming, our newly introduced prince was both young and handsome. And most importantly he had one special lady love. Her name was Madalena and the two of them appeared to be the very definition of happiness

However an evil king, King Richard, wanted the lady as well. And seeing as he had the manpower to carry out his heinous deeds for him – Madalena was soon kidnapped.

Naturally, Galavant pursued his fair lady acrossed the land but at last he was too late. Apparently by time he got there, Madalena had already decided a life with a king would be far more profitable than a life with a knight. So, in the end, she turned down her rescue.

And poor Galavant was left to lick his wounds the only way he knew – he drank himself stupid and was essentially living like a slob all the while the kingdom crumbled around him. Though, thankfully, they were at least a few people that hadn’t given up on him.

It seems Galavant was needed for a mission. The kingdom of Valencia was attacked and its Princess Isabella needed the good knight’s help in protecting Valencia’s most treasured jewel. But she failed to mention to Galavant who exactly was after the jewel. Because if she did then maybe he wouldn’t have turned her down right off the bat.

It’s the evil and some would say blind King Richard that wants the jewel. Funnily enough he wants to give it to his queen in hopes that after a year of marriage she will finally give up her vow of chastity.

Queen Madalena who was once a sweet young woman has turned into a raging she-demon who sleeps around on poorly besotted yet inept husband and now wants the jewel of Valencia for herself simply because she likes pretty things. So, yeah, Galavant dodged a pile of horse manure with that one. But he still wants revenge on King Richard.

Hence, when he learned who Princess Isabella was up against, he finally decided to return to the damsel in distress business.

Though, as it turns out, he was actually quite right to her down originally. It seems Isabella is a plant. In return for keeping her parents safe, the king asked her to bring Galavant to him so that for once and for all he could prove to his queen who’s the better man.

Again, this is the same cheating queen that drives everyone up the bloody wall!

But Galavant still loves her and after Isabelle had spun the tale King Richard wanted her to – Galavant now believes he has a chance with Madalena. Thus, the gang (he, his quire, and the princess) are on off on a journey. But before they face King Richard it seems that type of journey kind of needs some cash influx. So Galavant wounds up participating in a joust.

They need the money after all and unfortunately the only thing they have as collateral is the jewel of Valencia. So Galavant’s trusted squire Sid put that up in case his lord loses. Which means if the same Galavant that’s been put of practice happens since Madalena married the king just happens to lose the joust – the jewel is forfeit.

Luckily, Isabella refuses to let anything happen to her precious jewel.

She volunteered to act as Galavant’s training coach and while that was nice of her – they actually ended up training too hard. By the next morning, Galavant was too sore to life up his arms and was in no position to joust. Though, Isabella still came in handy. It appears she had also drugged his competitor so in spite of both men’s faults – it still was pretty equal fight.

The men were both horrible and Galavant only won because of chance. So the gang are back out on the road again. And the closer they get to the king and queen – the more the king works on capturing his cruel and callous wife’s heart.