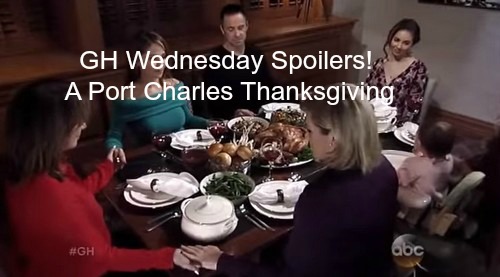 “General Hospital” (GH) spoilers for the Thanksgiving show on Wednesday, November 25 reveal Jason Morgan (Billy Miller) has a big announcement for the Quartermaines. Liz Webber (Rebecca Herbst) is there with her boys too.

After a warm welcome from Monica Quartermaine (Lesley Charleson), Michael Quartermaine (Chad Duell) and Sabrina Santiago (Teresa Castillo), Jason spills some news. First, he’ll tell the family that there are no answers about his past.

Jason will tell them that Helena Cassadine (Constance Towers) is dead but couldn’t give his memories back any way since it was the car accident that took them, not her. Jason and Liz have plans to move forward from there since he can’t go back.

Jason reveals he’s going to get a divorce from Sam Morgan (Kelly Monaco) and that he and Liz will have to delay their wedding but it will happen. Of course, that’s going to hit a roadblock when the secret Liz is keeping comes out, but that’s not for today.

Speaking of secrets, Sabrina is sitting on a whopper. Wanted man Carlos Rivera (Jeffrey Vincent Parise) is hiding out, yet again, at her apartment and he’s certain the baby is his. Meanwhile Sabrina lied and told Carlos the kid is Michael’s.

And of course, this means that Sabrina cannot come clean to Michael about the baby being fathered by Carlos with him back from the dead. Other Q drama is Dillon Quartermaine (Robert Palmer Watkins) telling his parents he’s leaving.

Looks like Lulu Spencer (Emme Rylan) breaking his heart will send Dillon back to LA but Tracy Quartermaine (Jane Elliot) and Paul Hornsby (Richard Burgi) don’t want him to go. Only Lulu can change his mind, but will she?

Lulu, meanwhile, is with her mom Laura Spencer (Genie Francis) having a mopey Thanksgiving. Lulu tells her mom she still loves Dante Falconeri (Dominic Zamprogna) and Laura will counsel her. Too bad Dante isn’t all alone anymore.

Valerie Spencer (Brytni Sarpi) shows up with Thanksgiving dinner for Dante just as he’s looking at the separation papers that Lulu left. Valerie will comfort Dante, but will they get too close for comfort? And will Lulu see them yet again?

Things are uncomfortable at Alexis Davis’ (Nancy Lee Grahn) house. Olivia Falconeri (Lisa LoCicero) gets into a spat with Ava Jerome (Maura West) who shows up out of the blue and Julian Jerome (William deVry) has to break up the clash.

Also, will Julian bonding with Olivia start to eat at Alexis? Worst holiday dinner ever – unless of course you’re dining with your shrink to whom you just confessed that you killed a man. That’s what Anna Devane (Finola Hughes) is facing.

Sam is totally trying to pretend that Patrick is not her consolation prize in the fight for Jason and that she’s put Jason behind her. She has not but will stick with Patrick because he’s better than nothing. This won’t last too long. Patrick isn’t an idiot.

But CDL will have “General Hospital” spoilers, gossip and news all week long, so come back here every day for tons of GH info – and be sure and share your comments below.