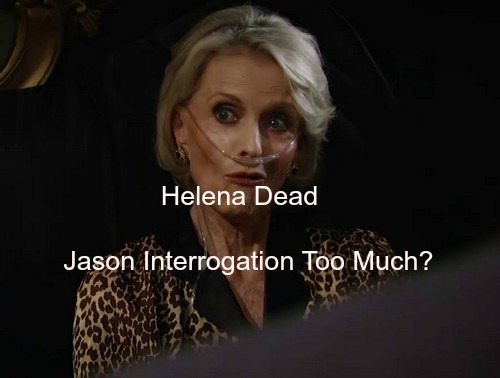 “General Hospital” (GH) spoilers reveal that Jason Morgan (Billy Miller) won’t get the answers he needs about his missing years and memory loss because Helena Cassadine (Constance Towers) will have a medical “crisis” that could result in her death.

Recent rumors indicate that Nikolas Cassadine (Tyler Christopher) will suffer a “loss” that devastates him. Could it be the demise of his wicked grandmother Helena? Since Hayden Barnes (Rebecca Budig) doesn’t yet know the truth about her shooting, Helena seems the logical source of the loss to come.

But how will this happen and – most importantly – is Helena gone for good? There are a couple of ways a Helena “death” scenario could play out. First, she could truly expire, kick the bucket, go to the great beyond, etc. Second, Helena could slip into an “irreversible” coma based on her current medical issues.

Third, Helena could fake death or coma as part of her scheme to keep the truth from Jason. Knowing the Cassadine family penchant for freezing relatives, “death” is rarely ever true death in that family. The Cassadines are like vampires – hard to kill, evil, and sadistic bloodsuckers.

So we have to wonder if Helena’s death means she’s well and truly gone or if she’ll turn up again like a bad penny. The other matter of importance is whether Constance Towers is herself suffering some ill health. Constance is 82 and may want to step down from portraying Helena.

So we may see a true character death of Helena Cassadine soon. If so, she’ll be one of the last of that generation of legacy characters. Helena is a contemporary of Edward Quartermaine, Lila Quartermaine, Mary Mae Ward, and Steve Hardy – all who have passed on.

Audrey Hardy (Rachel Ames) is rarely seen and is 86 herself. GH fans may need to prepare themselves for the imminent and ultimate demise of Helena. It looks like this could be it for the murderous Cassadine matriarch. But how will Helena’s passing affect Nikolas?

If Helena dies while Jason is interrogating her, Nikolas will likely blame Jason, and this could set them up for an even more contentious rivalry. And you have to wonder if Nikolas will turn even darker after her death.

Nikolas has taken ELQ, tried to assassinate Hayden (even though they were involved at the time), and has lied extensively to Sam Morgan (Kelly Monaco), Lulu Spencer (Emme Rylan) and other extended family members and friends over the past year and a half.

Except for Genie Francis (Laura Spencer), Nikolas will be bereft of elder parental and grand-parental figures in his life. The only “true” Cassadines left will be Alexis Davis (Nancy Lee Grahn), Sam, Nikolas and Spencer Cassadine (Nicolas Bechtel).

If GH showrunners take Helena Cassadine permanently out of the Port Charles picture – which could happen – it will be the end of an era. Co-writers Jean Passanante and Shelly Altman like to drop Easter eggs that hint at future plotlines.

With this in mind, consider this – when Helena first came onto the scene in Port Charles, she was portrayed by Elizabeth Taylor, and she showed up at Luke Spencer (Anthony Geary) and Laura’s wedding and cursed them.

On Friday’s episode, Helena cursed Sam in much the same manner. These two actions would perfectly book-end Helena’s character arc on General Hospital. She starts with a curse and ends with one – she’ll enter and exit with a bang, in true Cassadine style. We don’t want to see Helena go, and have fingers crossed that she lives on, but story-wise it could happen – we’ll know for certain next week.