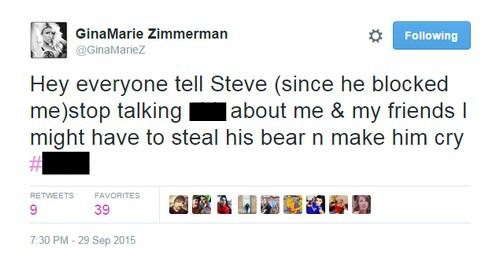 Oh snap, “Big Brother” drama just took an exciting turn on social media today courtesy of GinaMarie Zimmerman. “Big Brother 17” winner Steve Moses called Amanda Zuckerman out in a revealing interview with Reality Recaps touting she is a bully- inside and out of the house. Steve went on to state, “Amanda seemed to enjoy being a bully, so it wasn’t for strategic reasons.” He excused Dan Gheesling for his bullying in the house, citing he did it to further himself in the game. One thing is for sure; Steve never expected “Big Brother 15” runner-up, GinaMarie Zimmerman to step up to the plate and defend her close friend’s honor.

GinaMarie was not happy to hear that Steve was slamming her former house guest and best friend. She took to Twitter to tell him- and his fans- that she will not tolerate him talk crap about her friend. She revealed that Steve blocked her, or she would go to him directly to settle the Twitter squabble. She went on to state that she hates him and made a reference that he reminded her of ‘Norman Bates.’ She said, “He doesn’t know sh*t. I know Amanda both inside and out of the house, and she is awesome. She is one of my best friends.”

One of GinaMarie’s followers revealed that Steve had resorted to trashing Vanessa Rousso, as well. Gina Marie replied, “Steve’s a b*tch, Vanesa is amazing!!” She told her followers that she was a Vanessa fan all season and hated how squirmy Steve appeared. “There was something about that kid I didn’t trust,” she wrote.

GinaMarie proclaimed that she doesn’t usually fly off the handle about things she reads on social media, but Steve really got to her with his rude, snide comments. After two hours of her constant tweets, it looks like she’s settled down and not so angry about it all. Amanda Zuckerman tweeted to her, “I love that girl, GinaMarie. She’s my bodyguard”

When in the BB17 house, Steve would have panic attacks when he had to vote – nervous he was going to make the wrong decision. Just imagine how he must feel knowing that the New Jersey firecracker GinaMarie is furious with him. Steve’s best course of action would be to apologize and stop running his mouth about people he doesn’t know personally. Don’t forget to check back later for more “Big Brother” rumors, gossip, and updates!