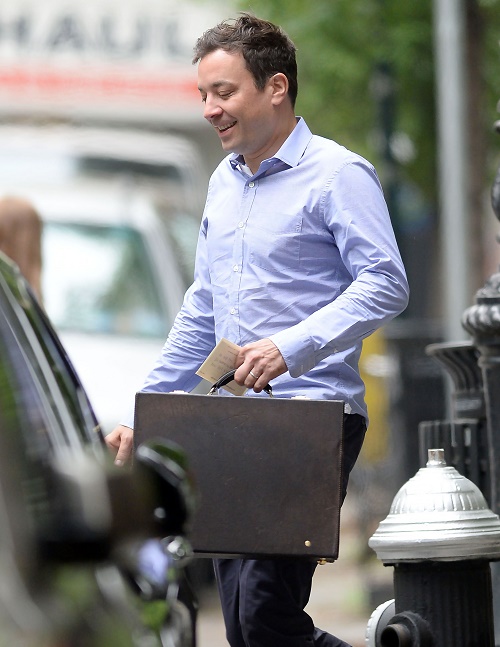 Jimmy Fallon’s fans have been sending him “well wishes” after his recent hand injury, but all his wife Nancy Juvonen will be sending him is divorce papers. The popular talk show host and comedian recently revealed a cast on his hand, and confessed that it was the result of him clumsily running into a table and he nearly had to have his finger amputated! But, the truth of the matter is, Jimmy hurt his hand while on a boozing bender with a handful of young hot women, and none of them were his wife!

According to this week’s edition of Star Magazine, “While the late night host blamed his gruesome injury on his two left feet. He was actually two sheets to the wind after night on the town with two young women.” It’s safe to assume that his wife, Nancy, wasn’t very sympathetic when she learned of the injury her husband received while out partying with other women – and it was the last straw after a lengthy list of Jimmy’s transgressions.

An insider dished to Star, “Nancy was really angry. Jimmy’s bad behavior has been getting worse and she totally lost her temper. She has been asking herself how he can possibly take care of his family when he can barely take care of himself. Nancy is really sick of it and I wouldn’t be surprised if she is threatening divorce.”

Jimmy’s wife Nancy Juvonen is not the only one who is sick of Jimmy’s drinking and partying. Apparently, NBC is fed up with the late night host’s recent behavior as well – and his job on the “Tonight Show” is reportedly in jeopardy. Sources on the set of the late night talk show reveal that Jimmy has been showing up late to filming, and hung over!

Do you think Jimmy’s drinking problem is being exaggerated or does he truly need help? Will Nancy threatening him with a divorce scare him straight? Let us know what you think in the comments below!