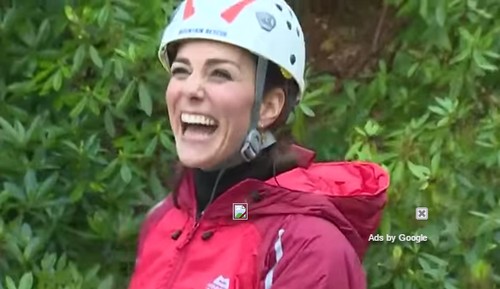 Kate Middleton has reportedly infuriated Queen Elizabeth again. Is the Duchess begging Prince William to give up his royal responsibilities after the couple’s trip to Wales?

The Duchess and Duke of Cambridge participated in a few outdoor activities while visiting Wales on Friday, November 20. Wills and Kate smiled and joked as they were buckled in for an abseiling – rappelling – adventure at Towers Residential Outdoor Education Centre in Capel Curig in North Wales.

As Prince William began a descent down the 40-foot wall he yelled up to Duchess Kate, “Are you holding me?” Laughing, the Duchess lovingly yelled back, “I’ve got you!”

Duchess Kate missing life in the small town of Anglesey to one of the royal couple’s abseiling guides. “I love it here. I really miss being here, being outside, and in the mountains.”

After a day spent outdoors in the mountains of North Wales is the Duchess of Cambridge is begging the Duke of Cambridge to give up his royal responsibilities? Does Princess Kate want to pack up Prince George and Princess Charlotte and live quietly in Wales?

The Middleton’s are allegedly trying to freeze the Royal family out of Princess Charlotte’s first Christmas and establish their own family traditions. Queen Elizabeth hasn’t taken too kindly to Carole Middleton once again trying to undermine a century or more of royal traditions.

Queen Elizabeth is no doubt still fuming over Princess Kate’s subtle remarks made during the Duchess’s Place2Be speech. Duchess Kate veered off the carefully prepared speech and got in some digs regarding the manner in which Princes Charles was raised.

Kate reminded those at the Headteachers Conference that she grew up in a loving home with parents and teacher who provided her with “a wonderful and secure childhood.”

Prince Charles was handed off to nannies while Queen Elizabeth was engaged in a constant round of State dinners, trips overseas and other obligations expected of the Royal family.

Prince William can attempt try to convince Queen Elizabeth to ease up on the necessary stuffy royal responsibilities. If anything Queen Elizabeth is angry enough to cram in quite a few more of those tiresome ribbon cuttings, museum visits and boring dinners Kate Middleton despises.