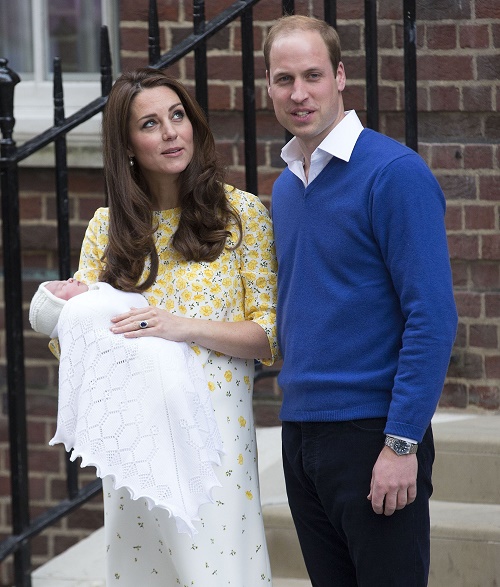 Prince William and Kate Middleton’s baby girl Charlotte Elizabeth Diana was born on May 2 at St. Mary’s in Paddington. At officially three days old, the young Princess officially met her great-grandmother Queen Elizabeth at Kensington Palace. According to reports, the elderly Queen arrived at Kensington around 2:00 PM on Tuesday, May 5 to meet will and Kate’s newest addition.

A report from HELLO Magazine claimed that Kate, Will, Princess Charlotte, and Prince George were set to travel to Amner Hall on May 5 and were planning to spend a few weeks of family time at their country home on the Queen’s Sandringham Estate. Apparently, the Duke and Duchess had a change of plans and will not be travelling to Amner – so Queen Elizabeth arrived at Kensington to meet baby Charlotte. Seeing as how the baby girl is only 72 hours old, it’s not exactly shocking that Will and Kate opted to change their plans and not travel yet.

Will and Kate’s plans to take the baby to Amner Hall for a few weeks are similar to when Prince George was born in 2013 – when he was just a few days old Will and Kate packed their bags and travelled to Carole Middleton’s estate in Bucklebury for some alone time with their new son. There is no news yet on why the Duke and Duchess of Cambridge had a sudden change of plans – it could be something as simple as logistics, or Princess Charlotte might just not be up to travelling yet. Or perhaps their toddler Prince George just wasn’t having a good day with all of the excitement over his new baby sister. Regardless, Queen Elizabeth had no problem making the trek over to Kensington to meet her new namesake.

Have you been following Princess Charlotte? What do you think of the baby’s name? Why would Will and Kate cancel their plans to travel to the Queen’s estate? Let us know what you think in the comments below!