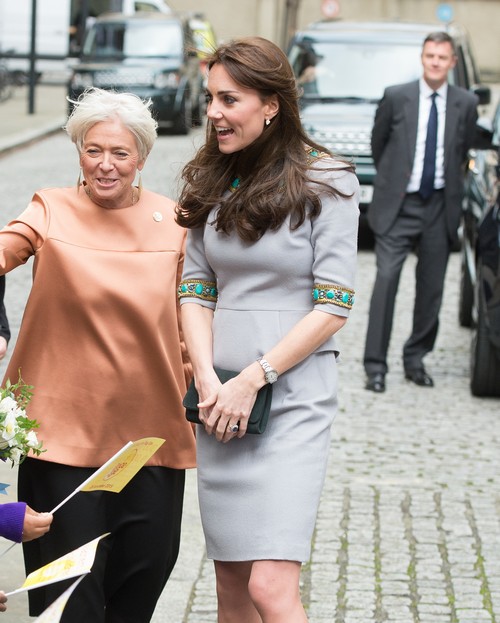 Kate Middleton’s Bucklebury neighbors are furious over some wooden acorn posts. The locals have declared the “commemorative statues” an eyesore, and Queen Elizabeth is disgusted by this latest scandal.

A well-meaning Lord of the Manor Willie Hartley-Russell chose the sculptures which sit at the entrance to the small village. The acorn posts were chosen as a “fitting commemoration of the Royal Wedding in 2011.” But Willie’s neighbors don’t agree and they want the ugly things torn down and turned into firewood.”

The Duchess of Cambridge is in hot water again and she most likely didn’t even know anything about these monstrosities. Queen Elizabeth becomes very cranky over every misstep Duchess Kate makes – and Princess Kate does that quite often. But does this latest scandal over these blots on the landscape of Berkshire have Queen Elizabeth unbelievably furious and fed up with the Duchess of Cambridge?

Making things worse, the Bucklebury villagers got into an argument at a town meeting over these nasty thing according to the Daily Mail. No one remembers giving permission for the recycled railway posts to be installed. Mr. Hartley-Russell says that he had permission from the local authority and parish council for the hideous wooden posts to be installed to honor Kate Middleton and Prince William’s marriage.

It’s not clear how much influence Carol Middleton had in pushing through the entranceway homage to Kate Middleton and Prince William. If Carole wanted a true tribute to Kate’s marriage to the second-in-line to the throne, these awful wooden posts are more than likely not what the manipulative Middleton matriarch intended. Upended wooden railroad ties? No, marble statues were probably what Carole Middleton wanted.

Will Queen Elizabeth demand that the posts come down? Bucklebury residents would most likely be very grateful for the monarch’s intervention. If the eyesores are torn down will they be replaced by something more fitting the future Queen Kate – perhaps her image chiseled in Italian marble?

The God-awful eight-foot wooden posts are on either side of the road leading into Duchess Kate’s hometown. A crudely engraved plaque on the front reads, “To commemorate the wedding of Catherine & William XXIX-IV-MMXI.

Did Kate Middleton even know these upright railway ties were being constructed to honor her marriage to Prince William? Is it fair for Queen Elizabeth to be angry with the Duchess? Do you think these ugly things should come down as soon as possible?

Let us know what you think in the comments section below and come back to CDL for all your Royal news and updates.